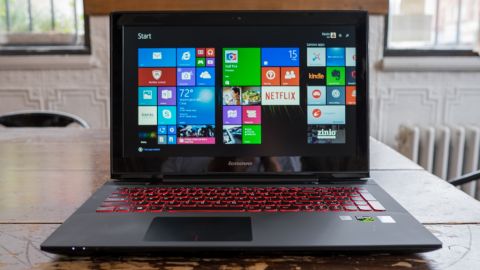 While the Y50 isn't the most powerful setup, it can hold its own playing a variety of modern games, like Sniper Elite 3 and Plants Versus Zombies: Garden Warfare. That said, this rig is not equipped to deliver the most consistent experience without tweaking graphics settings. Don't be surprised to see frames per second dip below 60 consistently in some games. Here's how the Lenovo Y50 fared with our synthetic tests:

As expected, the the Lenovo Y50 completely crumbled under the weight of Metro: Last Light on Ultra settings, registering just 9.33fps. The super demanding game has brought many laptops to their knees, including the Gigabyte P35W v2, which was not very far off with a 14fps performance. Despite toting a lower-end GPU, the Maingear Pulse 14 rendered the same Metro benchmark test at 11fps, but this can be attributed to its better performing CPU.

The Lenovo Y50 also seems to have the worst-performing CPU by far. In the chip-crunching Cinebench test, the laptop's onboard Intel Core i7 chip only scored 488 points. Both the Gigabyte P35W v2 and Maingear Pulse 14 performed much better on the same test, with 560 points and 577 points, respectively.

Running on a half tank

The removal of the Ultrabay is both the Lenovo Y50's reason for existing and its greatest weakness. The older Lenovo Y510 was never the best machine on the market, sporting a single Nvidia GTX 750M. But, thanks to the Ultrabay, the laptop could run two GPUs in SLI. While this rig's sole Nvidia GTX 860M is no slouch, it's definitely lacking when it comes to gaming.

The Lenovo Y50 has no problems multitasking a half dozen applications concurrently, including one seriously resource intensive image editor, while streaming tunes from Google Music all at the same time. Sadly, performance with games is inconsistent.

Wolfenstein runs at or near 51fps on Ultra, which is great. But in Sniper Elite 3, sniper rounds traveling in slow motion with tons of PhysX computations behind them throw the Y50 off its game, reducing a smooth experience on high settings from 53fps to 39fps.

Regarding the choice of GPU, size is clearly not a problem. The P35W v2 is an even thinner machine with a more gaming-capable Nvidia GTX 870M. For the Y50, the option simply does not exist, for whatever reason. The real shame is that gamers will have to look elsewhere to fill their power needs, and many other companies do not build a chassis as premium as the Lenovo Y50.

Not exactly a sight for sore eyes

The display Lenovo chose to stick inside the Y50 is, frankly, terrible. Color looks dull and lifeless, making the screen look unsightly for playing games outside of brown-and-gray shooters.

The same problem arises when streaming colorful TV shows and movies. The desaturated screen also makes it useless for photo editing – both professionally and for personal use – when users need a screen with decent color accuracy.

What's more, the screen is both lacking in brightness and black levels. I often find myself turning up the backlight well toward its maximum brightness even in a well lit room at night. As a result, any blacks on the display are washed out into pale gray blotches.

The Y50's other shortcoming is its battery life. The notebook only managed to stay on for a scant 2 hours and 49 minutes for the duration of the PCMark 8 battery test. Synthetic tests tend to a be a bit more taxing than real life use, but the Y50's performance still falls short compared to Gigabyte P35W v2's 3 hours and 19 minutes on the same test.

My own testing saw the machine hang on for an even shorter 2 hours and 45 minutes. Admittedly, I was running some fairly intense applications – including a resource intensive copy of Sigma Photo Pro 6 and Skype (which eats up a surprising amount of battery life) – but only for roughly 30 minutes each.

I then opened a handful of browser tabs split between Firefox and Chrome, plus piping Google Music on speakers with the volume at 15 percent, and a round of Hearthstone cut short by the laptop's dead battery. Meanwhile, all of this was done at with the screen brightness set to its near maximum (again a necessity with the Y50's dull screen).

Under a less stressful workload and dimmer screen, you might be able to stretch out the Y50's battery by another 45 minutes at most. With this laptop, always keep your power cord on hand and a keen eye for power outlets. The P35W v2 has a much more serviceable battery life, at 4 hours and 3 minutes. The Pulse 14 also hangs on almost as long, for 4 hours and 2 minutes.

Coming from a business background, Lenovo is usually good at including helpful business applications. However, the company has a lot of lessons to learn about filling its gaming machine up with unwanted clutter. What you're looking at here is a mix of useful and unwanted applications to down right junk eating up your storage space.