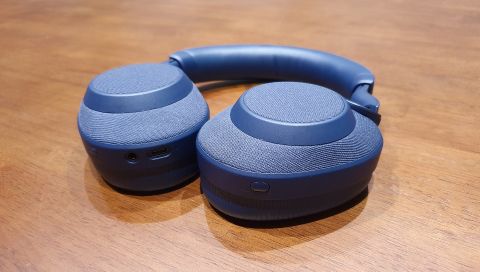 Jabra's Elite 85h headphones offer incredible battery life and terrific noise cancelling in a very stylish package. Purists may be put off by the lack of high-end audio codecs like AAC, aptX or LDAC, but the Elite 85h sound roughly as good as Bose's QuietComfort 35 II – and they're much prettier, too.

Jabra’s bona fides in the world of wireless in-ear headphones have been proven repeatedly over the last couple of years, with products such as the Jabra Elite Sport and Jabra Elite 65t earning the Danish audio company a great deal of much-deserved praise.

Now, Jabra aims to shake up the premium over-ear headphones market with its Jabra Elite 85h – a pair of active noise-cancelling cans that boast incredible battery life and a variety of AI smart features that can be tweaked via the company’s Sound+ app.

Despite this lofty goal, the Elite 85h headphones absolutely deliver the goods thanks to their class-leading battery life, terrific call quality, impressive noise-cancelling and understated style. That said, a lack of support for some high-end codecs may turn off audio purists.

Accompanied by a sturdy faux leather case with a soft fabric interior, Jabra’s Elite 85h exude a sense of quality from the get-go. Tucked inside the case’s fabric divider, you’ll also find a 3.5mm Aux cable, an airplane audio adapter and a USB Type-C charging cable.

But we know you’re not here to read about the Elite 85h’s carry case and various accoutrement, so we’ll cut right to the chase – Jabra’s first attempt at a pair of premium wireless ANC headphones is an absolute winner in the style and comfort departments.

Available in Titanium Black, Gold Beige and Navy (which is what we’ve reviewed), Jabra’s Elite 85h employs a sense of minimalistic chic in its design, with each set of headphones opting for a one-color approach which only changes shade slightly for its extendable arms and subtle logos on each side of the headband.

Despite the mention of titanium earlier, the headphones themselves are comprised mostly of plastic (that includes the aforementioned extendable arms, which have a brushed-metal appearance). Thankfully, the plastic itself is quite sturdy and offers a bit more flexibility to accommodate for smaller and larger heads.

Along the top of the headband and on the outer side of each ear cup, the Elite 85h features an aesthetically-pleasing meshed-fabric material, which instantly gives the headphones a sense of personality.

Faux leather once again adorns the Elite 85h’s ear cups and the headband’s underside – both of which are exceptionally-soft and foam-cushioned for added comfort. It’s also worth mentioning that the headband itself has been pre-tensioned, allowing for extended use without feeling intense pressure on your noggin.

Look closely on the right ear cup, and you’ll see a set of very subtle control buttons. The larger fingertip-sized indentation lets you pause or play your music, as well as answer calls, while the tiny dots above and below that button allow you to raise and lower your music’s volume with a short press and skip tracks with a long one.

The Elite 85h’s USB-C charging port can be found on the bottom of the right ear cup, along with the unit’s 3.5mm Aux port and a button for muting your voice during calls. The left ear cup, on the other hand, keeps things relatively simple, sporting only a single button that lets you cycle through ANC modes for when you don’t feel like taking your phone out to change them in the Jabra Sound+ app.

You may have noticed that we didn’t mention a power button – that’s because the Elite 85h headphones don’t have one. Instead, the cans will automatically turn on when the cups are turned in towards each other, and turn off again when you’ve flattened them out. Music will also pause on its own whenever you take the headphones off your head.

Jabra also offers a 2-year warranty against rain, sweat and dust, which should somewhat put your mind at ease when it comes to the Elite 85h’s durability.

In terms of its ANC functionality, the Elite 85h headphones offer a variety of modes, referred to by Jabra as ‘Moments’, which let the user choose from four different levels of noise cancelation – Commute, In private, In public, and of course, no noise-cancelling at all.

Alternatively, you can also create your own ANC profile known as My Moment, which lets you manually adjust music EQ settings, presets and whether you want to turn on HearThrough, which lets outside audio in.

Taking things a step further, Jabra has employed sophisticated ‘intelligent adaptive technology’ to adjust its level of ANC depending on your surroundings with its SmartSound mode.

When set to active, SmartSound will use AI for real-time scene analysis of sounds coming from your environment. Essentially, this lets the app know which ANC mode it should automatically switch to.

For instance, SmartSound will detect whether you’re on public transport and dial the ANC all the way up to drown out unwanted noise. If you’re alone in a quiet room, ‘In private’ mode will kick in and automatically switch off ANC and HearThrough in order to conserve battery.

Arguably the most useful mode, however, is ‘In public’, which lets in just enough noise to allow the user to hear announcements, sirens and other noises they should probably be paying attention to.

This all works remarkably well, though the Elite 85h will vocally announce mode changes as they happen, which can be a little distracting – particularly on a train ride, where SmartSound tends to flip-flop between ‘Commute’ and ‘In public’ modes every few minutes. Thankfully, these headset prompts can be switched off in the Sound+ app’s settings.

Voice assistant support is also integrated into the headphones, allowing users to make full use of Siri, Google Assistant and Amazon Alexa.

When it comes to noise-cancelling, Jabra’s Elite 85h are among the best headphones we’ve tested. As soon as the cans power on, audio is sucked out of your ears in an instant. Unlike with many other ANC cans, we didn’t suddenly feel vacuum-like pressure on our eardrums, and while noise-cancellation will always feel a little unnerving for first time users, Jabra’s headset does a good job placing you in near-complete silence without making you feel like you’re underwater.

Of course, you will hear some faint noise coming through when music isn’t playing, but it will be significantly reduced to the point where you probably won’t notice again once your tunes have kicked in. Additionally, we’ve not experienced any of the whistling or hissing noises that can sometimes affect ANC headphones when used in windy environments.

As great as Jabra’s AI-based ANC features are, sound quality is ultimately the most important aspect when it comes to purchasing a set of premium headphones, and thankfully, the Elite 85h’s audio performance is closest to Bose’s impressive QuietComfort 35 II headphones.

When set to its default sound profile, Jabra’s cans offer nicely balanced audio that favours warmth and clarity, allowing instrumentals to really shine without any of the muddiness found in the mids of bass-heavy headphones like Apple’s Beats Studio 3 Wireless cans.

Of course, you can fine-tune the Elite 85h’s audio performance in the Jabra Sound+ app, allowing you to choose from several musical equalizer options – EDM and hip-hop fans will appreciate the ‘bass boost’ EQ setting, while the ‘treble boost’ option will allow for increased volume and dynamics in the high end for guitar-based tunes.

That said, you will find deeper, punchier bass in other similarly-priced ANC headphones, such as the aforementioned Beats Studio 3 Wireless and Sony WH-1000XM3 cans – while the Elite 85h’s lower end performance is generally very good, occasional distortion can occur when some bass-heavy songs are played at full volume.

What may alarm audio purists is that the Elite 85h headphones currently do not support higher end audio codec compression algorithms such as AAC, aptX or LDAC, which help to deliver music at near CD-like quality over Bluetooth. Without these codes, fidelity will be lacking somewhat while listening to FLAC files or lossless music. This could conceivably be addressed with a firmware update, but there’s no way of knowing if that’s currently on the cards at this stage.

Additionally, a ‘speech’ setting brings greater clarity to vocals and spoken word audio such as podcasts and audiobooks, while jazz and live-music fans will appreciate Jabra’s ‘smooth’ and ‘energize’ equalizer settings.

Speaking of speech, we have to commend Jabra on the call quality it has achieved here. Calls come through loud and clear on the 85h headphones thanks to the inclusion of eight microphones in total (six of which are used to enhance call quality), and we appreciate the way that ‘HearThrough’ will automatically switch on when a call is answered, allowing you to also hear yourself during a conversation (surprisingly, this is not a standard feature on many over-ear headphones).

Saving the best for last, Jabra’s Elite 85h are hands-down the winner when it comes to battery life in the wireless ANC category, with a full charge providing 36 hours of playback with noise-cancelling switched on, and a staggering 41 hours with it switched off. Additionally, 15 minutes of charging is said to give you five hours of battery, which is mighty impressive.

Offering class-leading battery life, terrific style and plenty of personalization when it comes to sound profiles, the Elite 85h is easy to recommend. That said, purists will bemoan the lack of high-end codec support and there are punchier headphones on the market at this price point. When you consider that Jabra’s Elite 85h headphones are the company’s first attempt at premium wireless ANC headphones, the result is quite commendable. We can’t wait to see what the company’s next premium ANC headphones will accomplish.