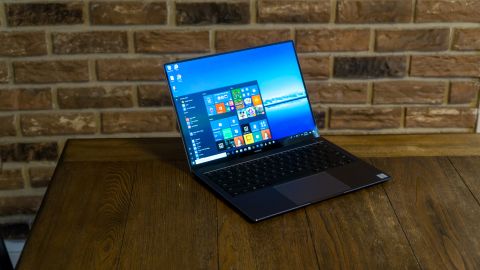 Huawei has crafted a sleeper hit best laptop of 2018 with its MateBook X Pro, a surprisingly sublime marriage of function and form with few, if any, flaws to speak of for all audiences both professional and prosumer.

We definitely didn’t see this coming, but there’s a new best laptop in town: the Huawei MateBook X Pro. We’ve been so taken by this sleeper hit laptop, that it now sits amongst the highest ranking in our top buying guides.

With Huawei’s MateBook X Pro, we get the speediest, most luxurious and long-lasting laptop we’ve seen since the Dell XPS 13. We have to admit that Huawei did this by emulating trendsetters pretty faithfully, but none of its predecessors have come close to this balance of function and form.

And, yeah, the Huawei MateBook X Pro is expensive, but the math works out in Huawei’s favor, offering capabilities that few of its closest competitors can muster for a similar price. Now, let’s get into it.

Watch our hands-on video below with the matebook X Pro:

With these prices, the MateBook X Pro model reviewed here looks like a veritable bargain next to the most expensive 13-inch MacBook Pro configuration that costs $2,299 (£2,219, AU$3,479). Meanwhile, the XPS 13 is handily beat in terms of value, too, costing $1,999 (£1,649 AU$2,464) to meet the most expensive MateBook X Pro configuration – and with still only half the storage space.

Though, in either case, neither of these options offer the dedicated graphics that Huawei’s new laptop does.

The MateBook X Pro’s design keeps the premium feel of its predecessor alive, featuring an aluminum unibody design with diamond-cut edges and a sandblast finish. This results in a laptop that undoubtedly looks luxe – and feels that way as well.

Clearly, this is a slim and light-enough laptop to comfortably carry around. Again, the MateBook X Pro comes in two colors, Space Gray and Mystic Silver, and both look gorgeous up close. Of course, you’ll have to get the priciest version if you want that silver color – at least in the US.

While using the MateBook X out in the real world, the lightweight and portable chassis meant that it was easily clasped in hand while rushing from meeting to meeting. It also fits in most backpacks – and even some tablet compartments. So, despite considerable power within, the Huawei MateBook X Pro is an incredibly portable machine.

There’s a full size keyboard that’s backlit and spill-proof, though we wish the backlighting had more fine control than just a few brightness levels. That said, the travel on these keys is plenty deep for the laptop’s awfully thin profile, and they are just punchy enough on the return from a press to present little to no learning curve from other premium laptops, namely the MacBook.

Beneath the deep-and-punchy keyboard rests the large trackpad – which Huawei says is the largest one found on a 14-inch laptop. After a bit of use, we can confidently say that the extra-sized trackpad only helps the experience, with Microsoft’s Precision Touchpad technology and certification resulting in strong palm detection. This keeps your palms from triggering touches of the trackpad while typing.

On either side of the keyboard are two top-firing, stereo speakers (for a total of four) that support Dolby Atmos, and it shows. Audio set at 80% volume is loud and impressively nuanced when playing music or movies. We can actually hear the sound travel across the four distinct audio channels.

Above the keyboard is the power button, which – like the MateBook X – has a built in fingerprint scanner for Windows Hello. This is an excellent idea, as it means you can turn on the laptop and sign into it with just a single touch. Huawei tells us that, from cold startup to logging into Windows 10, it takes just 7.8 seconds to start the machine – and just 6.6 seconds from hibernation. We’re getting similar numbers in our testing.

This is thanks to the fingerprint sensor being a hardware-level part, meaning it’s controlled directly by the processor, not by Windows 10 – of course, it still works with Windows Hello. It’s little touches like this that help Huawei’s laptop stand out from the competition.

The 13.9-inch IPS (in-plane switching) screen now has impressively thin, 4.4mm bezels surrounding it. This keeps the overall size of the laptop down to just under 12 inches wide. Huawei claims that the MateBook X Pro is the world’s first ‘FullView’ notebook, with a 91% screen to body ratio.

In comparison, the original MateBook had a ratio of 84%. We’re serious fans of screens with tiny bezels, so by giving over so much space to its display, the MateBook X Pro is undoubtedly eye-catching.

In fact, the bezels are so small that Huawei came up with a unique placement for the MateBook X Pro’s webcam: it’s actually in the keyboard beneath a key with a camera icon on it. Pressing the key depresses a latch that lets the 720p camera appear.

This doesn’t really solve the whole ‘ChinCam’ problem we’ve seen on laptops like Dell XPS 13. Rather, it exacerbates the issue with this new webcam position creating an all new 'KnuckleCam' problem. Excited typing can result in rogue knuckles appearing on-screen and, unlike the camera on the XPS 13, the MateBook X Pro camera can't be tilted up or down.

That said, the ability to completely hide away the webcam is excellent for privacy. In this way it feels like a more elegant and clever solution other thin-bezel laptops.

Now, back to that display: it’s now a touchscreen with snappy response and Gorilla Glass protection to keep it from getting scratched. It also has a 3K (3,000 x 2,000) resolution, which leads to a 260 PPI (pixels per inch) pixel density. So, the display is plenty sharp, though you may notice that it is more ‘square’ than other laptops.

This is because it features a 3:2 aspect ratio, like the MateBook X before it, rather than the most common ratio of 16:9. So, it offers more vertical space than other laptops, which can help with productivity, though watching movies and TV on it will result in more pronounced black bars at the top and bottom of the display than most.

No matter what you use it for, the screen undoubtedly looks sharp and vibrant, with a 450 nit brightness able to combat some serious glare even at 50% brightness and 1,500:1 contrast ratio for seriously deep blacks.