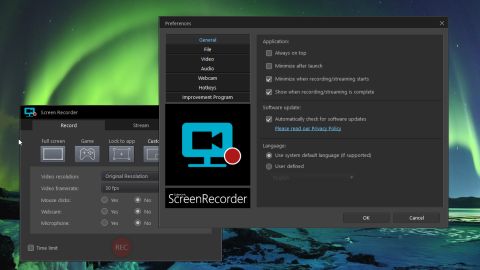 Easy to use, flexible and reasonably priced, CyberLink Screen Recorder 3 Deluxe is a great choice for gamers who want to upgrade from free recording and streaming software without breaking the bank.

If you’ve used CyberLink software before, you’ll know what to expect from CyberLink Screen Recorder 3 – an interface that’s clear and straightforward, even for total beginners, but surprisingly powerful once you drill into the more advanced options.

There's no shortage of premium screen recording and streaming apps for serious gamers and vloggers, but until now there's been a substantial gap between these expensive programs and free alternatives that often apply watermarks to your videos or impose time limits, and lack advanced features like picture-in-picture that make the difference between a professional-looking production and something put together quickly for fun.

With CyberLink Screen Recorder 3, you can capture your entire screen, a specific app (useful for presentations and video tutorials) or a custom area. That's fairly standard, but you can also record games with hardware acceleration or capture video from a connected device like a webcam – all with a couple of clicks.

You can choose to capture video at the original resolution, 1080p, 720p or 480p, meaning you don’t have to spend time resampling it with a separate video editor. It's also possible to set a time limit for your recording, which is particularly handy if you want to upload your video online and need to keep within certain parameters, or need to avoid making a particularly large file.

Set up your webcam and you can add picture-in-picture video alongside the on-screen action. It's also possible to add narration from a microphone – either instead of the sound from your PC, or as well.

It's not just for games though; one feature that’s particularly useful if you’re recording a tutorial is the ability to capture mouse clicks, which appear as pulsing circles. We particularly appreciate the ability to change the color so clicks are clearly visible against different backgrounds – a small touch, but a thoughtful one.

Once you've made your recording, you can cut it, combine it with other media files, add fully customizable titles and apply transitions – all without installing a separate video editor (though If you own CyberLink PowerDirector, you can choose to create MRK files for more advanced editing later).

Our only complaint would be that the editor is a little hidden away. To use it, you have to open the Library (the multi-page icon at the top right of the interface), then pick the clip you want to edit.

The software doesn’t bombard you with options from the outset, and you can easily begin recording using the default settings with a single click, but delving into the preferences menu will open up a wealth of other possibilities.

You can choose the default location for recordings and set a naming format – essential if you record regularly – choose which monitor to record if you have a multi-screen setup (the software supports up to three displays), enable hardware encoding, adjust sound and webcam options, and set hotkeys for quick access without the software’s interface getting in the way.

Some streaming software can be quite complicated to set up (we’re looking at you, Xsplit Broadcaster), but CyberLink Screen Recorder 3 is refreshingly straightforward, with preset profiles for YouTube, Twitch and Facebook. Just log in, set a resolution and framerate (the available options will depend on the service you’ve chosen), and the software will do the rest. You can save the streamed file to your PC if you like. It really is that simple.

If you only need to capture recordings occasionally and don’t need more advanced features like picture-in-picture then you might find a free tool like OBS Studio adequate, but if you need to capture your screen or stream regularly then CyberLink Screen Recorder 3 Deluxe is one of the best tools for your money.

It's much less expensive than alternatives like Xsplit Broadcaster and Camtasia Studio, which both cost US$199 (about £140, AU$260) for a lifetime license, making it a great choice for anyone who wants to give their streams and videos an edge, but is a hobbyist rather than a professional.