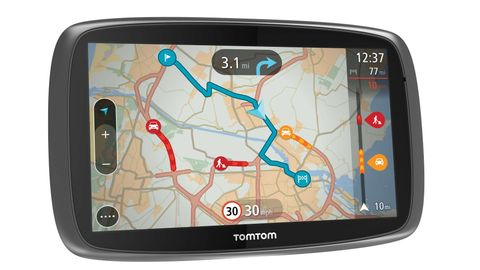 Recommended
This is the sat nav you've been looking for...

The TomTom Go 6000 is exceptional. The experience you'll enjoy when using this compared to what you'll get from a smartphone or even an older sat nav is incredible, and you get lifetime map and journey updates for 45 European countries.

With the release of the premium-level Go 6000, it feels as if TomTom is correcting all the wrongs of its sat nav range. Wrongs that only TomTom seemed to know existed.

The TomTom Go 6000 boasts a new chassis, a new interface and a whole new way of working. But should TomTom be fixing things that weren't obviously broken in the first place?

We ask this because TomTom's previous offerings have been no stranger to awards, with the likes of the TomTom Start 60 and the Go Live 825 both getting full marks here on Tech Radar. Like the Start 60, the TomTom Go 6000 is a 6-inch device, but this new premium sat nav boasts plenty of new features to tempt you away from your older sat nav or your smartphone.

Straight out of the box, it's clear that TomTom has a new direction in mind for its sat nav range, employing a distinctly different chassis to what has gone before along with a new mounting system.

The large device eschews the straight lines of previous models, preferring to go for a curvier design that is somewhat reminiscent of the Nexus range of tablets. It's a large device, but is pleasant to hold - although you will need big pockets if you're planning on taking it out of the car with you.

A notable change over previous models is the mounting mechanism - TomTom has used an integrated mounting mechanism on its sat navs for a while now, which can flip around and close neatly onto the back if its devices. We're fans of this mount on smaller devices, as it makes the eminently portable, but on larger devices it could be little fiddly.

For the Go 6000 though, TomTom has introduced a more-traditional, separate mount - one that you attach to your car windscreen or onto your dashboard, and that you then drop the sat nav in and out of. This mount includes the power connector and uses a traditional suction cup system that you twist the collar to lock in place.

This new mechanism allows you to easily pop the sat nav off the mount, and enter your destination or change the settings comfortably in the palm of your hand before popping it back into place so that it could navigate you to your destination.

You can of course interact with it in place as well, and the strong magnets used to hold it there never popped out when doing so.

TomTom hasn't limited the improvements to the Go 6000 to the hardware side of things either, as the interface has enjoyed a significant overhaul. The new interface is dominated by the main navigation screen, with a thin column on the right of the screen that shows you delays on your route along with the distance to your destination along with your ETA.

Immediate directions occupy a thin lozenge at the top of the screen, with a similar lozenge at the bottom for the speed limit and your current speed.

Controls for zooming in the 3D display and for changing the view can be found on the left hand side of the display. These icons are small and look potentially fiddly to access, but in practice we had no problems using them when the sat nav was mounted or in our hands.

In the bottom right hand corner there's the main menu button, which takes you to a similarly paired-down screen. Here you can enter your destination, look for local points of interest and change the display of the sat nav. Given the general consensus by the industry to pack such screen with more and more esoteric options, it's refreshing for TomTom to buck the trend and focus on what really counts.

Another major addition with the TomTom Go 6000 is something that TomTom calls 'Always Connected', that is, it boasts an integrated data modem to access the TomTom data network directly from the sat nav. You don't incur any additional costs when using this, and it even works when you're driving around Europe, signal permitting of course.

This covers you for real-time updates on slow moving traffic and roadworks on your route, via the TomTom Traffic system. You get three month's worth of Speed Camera data as well, although having to pay extra each year to keep the camera data up to date does seem a bit cheeky.

This data capabilities does add to the initial cost of the unit - it's £60 more expensive than the similarly specified TomTom Go 600, which requires you to pair your smartphone with it to get the same data, but the convenience this offers handling the data connection itself is well worth it in our opinion.

The TomTom Go 6000 isn't the first large-screen sat nav we've seen, but we can't overstate the difference that having such a large device makes to your driving experience. A large screen sat nav basically changes the way you drive. It frees you from relying exclusively on the limited information you get from the directions delivered by voice, and means you can correctly predict what is coming up so much better.

Anyone that has owned a sat nav before knows that the likes of "In three hundred yards turn right" doesn't necessarily mean doing anything of the sort. With a 6-inch screen displaying the road ahead so clearly, you learn to drive accordingly, and while the voice is still important, it's now just part of the information at your disposal, not the only thing.

The screen on the Go 6000 is clear and bright and it's easy to see what's going on in all kinds of light levels, even when the sun is shining directly on it. TomTom has used subdued colours for everything bar the main route, and this all helps. You also have the option of switching to a night mode if you're driving at night, but don't want to keep your passengers awake with its brightness.

In use we found the TomTom Go 6000 performed very well - with a good choice of routes and accurate journey times, thanks in no small part to the TomTom Traffic data. Entering destination information was intuitive, with plenty of scope for finding places either by entering postcodes, towns and street name or by interacting directly with the responsive maps.

There are quite a few voices included as standard, although the computerised voice gives you the most information as it can read out street names as you go - useful in built up areas - although some of the pronunciations can be a little off.

Speaking of which, we would have preferred hardware volume controls compared to having to go to the menu screen to alter the volume levels. Realistically though, once you set it up perfectly once, you generally don't need to mess around with your volume levels too much.

The TomTom Go 6000 is an impressive piece of kit. The interface is intuitive, with TomTom's excellent routing benefiting from being able to draw on live traffic data to make for incredibly accurate journey times as well.

The fact that it includes lifetime map and journey updates for 45 countries in Europe make it all the sat nav you should ever need. We would have preferred to have the camera data include for free as well, but if mobile camera positions really are that important to you, then the £20 a year cost is probably good value.

The screen is bright and clear and easy to see whatever the lighting outside, and the voices are clear and precise too. The new mounting system is solid, yet it's easy to remove the sat nav from its cradle if you need to. You can charge the sat nav from a standard micro-USB connector, if you're away from your car too, which adds to its flexibility.

If we do have any genuine criticisms of the TomTom Go 6000, it's with the construction of the unit, or rather TomTom's choice of materials.

The plastic chassis simply doesn't feel like a £300 sat nav. With the likes of the Start 60 rolling in for less than half that price, you need to feel like you're getting a premium product - and while the experience is up to scratch, the plastic chassis does feel like it's from the budget end of the spectrum.

Overall though, the TomTom Go 6000 is an exceptional sat nav. Kudos to TomTom for rethinking the device from the ground up to produce an even more-compelling companion to your journeys.

The experience you'll enjoy when using this compared to what you'll get from a smartphone or even an older sat nav is incredible. You won't be second guessing what's around the corner or waiting for the signal to catch up - and while that will cost you, it's money well spent.