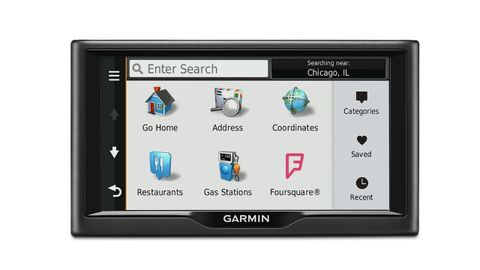 A great dedicated nav at a decent price, but no traffic data may kill the deal.

Another new sat nav, but the same old problem. Is there any point today in a dedicated navigation device? That's the challenge for the Garmin nuvi 68LM.

After all, smartphones now come with turn-by-turn navigation as standard. What's more, their screens are growing larger by the day and thus nearly cancelling out the most obvious advantage of dedicated sat navs, namely screen size. So the nuvi 68LM's six-inch screen isn't necessarily that much bigger than your smartphone.

Garmin's response is twofold. First, do the basics really well – better than any smartphone – and for a reasonable price. Second, the 68LM throws compatibility with an add-on reversing camera into the mix. Is it enough? Let's find out.

The Garmin nuvi 68LM's six-inch screen is probably right in the sweet spot in terms of display size for use in passenger cars.

It's big enough for excellent clarity and to allow for the big buttons on-screen and generous menus that are so important for in-car usability. In that regard, it has the edge even over the latest five- inch smartphones. Every little helps.

You can, of course, go even larger. But while even bigger can mean even clearer, beyond six inches you can run into problems in terms of obscuring your view ahead or finding a suitable mounting location on the car dash.

The 68LM also has a reasonably compact bezel, so it's fairly compact for a six-inch sat nav. As for screen quality, it's an 800 by 480-pixel panel, which is undramatic by smartphone standards but actually provides crisp image quality at the greater viewing distances typical with satnav use.

The panel isn't going to win any awards for colour accuracy or viewing angles. But the powerful backlight ensures you can see it clearly in daytime use, which isn't always true of smartphone screens, for instance. For the record, it will run in both landscape and portrait modes.

The suction mount for locating the device on your windscreen is another plus point. It's very easy to set up and achieves and extremely sturdy attachment to the windscreen and an equally solid interface with the nav device itself. We have no fears about the device falling off, even on bumpy roads, and there's absolutely no shaking or rattling.

First up, it's worth being clear what the Garmin nuvi 68LM doesn't have. It's part of Garmin's entry- level range and rocks in at £149.99.

That means it does have a data connect and it doesn't support live services like HD traffic or online searching. You also can't connect it to your phone to provide in-car hands-free.

Finally, it only has a small battery that delivers around an hour's power. That allows the unit itself to be slimmer and keeps the price down, too. Given that the overwhelming usage model for a device like this is plugged into a car's 12V supply, that's absolutely fine. The battery is really only there to smooth over those moments when power might be cut temporarily.

While we're talking power, the supplied 12V adapter is a bit of a problem. The socket end of it is huge. This is a common problem, but it's certainly unnecessary and can make for a very unsightly installation depending on the location of your 12V sockets.

Luckily, the unit will accept a standard miniUSB connection, so if you have a USB socket or a compact 12V USB adapter, you're good to go using those.

Elsewhere, there's still plenty of interest for anyone looking for a really effective sat nav. Firstly, you get full European maps with four annual updates for life. There's also a microSD slot to allow for memory upgrades if you're bunging on a lot of maps.

Other highlights include a POI database provided by Foursquare, more natural searching for addresses and points of interest and what Garmin calls Real Directions, which involves spoken navigation cues that are supposed to be more human and thus easier to follow.

Next up is a speed camera database provided the Cyclops Speed Camera System and support for that Garmin reversing camera, the BC 30, yours for an additional £149.99. Finally, Garmin has revised its map interface with a new feature called Up Ahead that's design to help you to get at the most commonly used features more easily and also make it easier to search for common destinations like petrol stations when en route.

There's also an eco-driving app that allows you to set up car profiles and calculates both fuel costs and CO2 emissions. Be warned, you might not like what you see, but it could make for a handy motivator in terms of improving your eco driving.