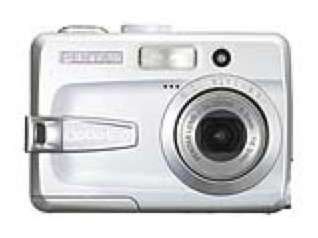 If the autofocus performance wasn't so poor it would probably be one of the best-value cameras on the market.

Pentax has made a bold move by offering a 6Mp compact for around £100. It's well suited to a fledgling photographer with its excellent image quality and simplicity.

Budget is good. Budget flights, budget holidays, budget fashion labels, sticking to the budget - it's all so now. But what about budget cameras? Are they a good thing or just cheap and nasty?

The Pentax Optio E10 is budget through and through. You can pocket one for a whisker over £100 and for that you get a whopping six megapixels - unimaginable a couple of years ago. There are a ton of cameras with similar specifications but you'll pay at least £150 for one. For £100 you usually only get three or four megapixels. So what's the catch?

One area where there isn't a catch is in build quality. Although it's housed in a plastic body, the little E10 is really well screwed together and all the buttons click just as you'd hope. It's also got a fairly big and bright screen that's an unusual 2.4 inches across the diagonal.

It does a good job in all but the brightest of sunshine. Inexpensive the E10 might be but it doesn't go out of its way to trumpet its budget origins and won't embarrass you in public.

While it is a pretty little camera, the E10 is a touch thicker around its waist than some of its slinkier counterparts. Those extra millimetres do allow for enough space to house two AA batteries that power the camera. Of course, Pentax recommends sticking to using Ni-MH rechargeables and the company claims 300 shots from a pair of 2,500mAh cells, although we found this a little exaggerated and would put the fi gure much closer to 200.

What isn't overstated is the feature list that contains all that a novice snapper could wish for. You'll find portrait, landscape and black & white modes, auto bracketing, and even a slideshow review mode. The menu is fairly straightforward but if that is enough to fox you, then just turn the top dial to the 'simple' setting and your options are simply limited to changing image size and quality.

One function of the camera that could hinder you is the maximum sensitivity of a puny ISO200, which will force you to use the fl ash in darker conditions. The flash is a little underpowered and it takes an age to charge up, but at least it doesn't over expose at close range. Another annoying feature is the four button presses it takes to delete a single image.

Those few gripes aside, the Pentax is so far looking a good buy. But what happens when you press the shutter? Well you'll have to wait for that... and wait... and finally you've got a picture. And as you press the shutter the little square in the middle of the screen has to turn green to show that the lens has focused, and only then can an image be captured. This takes a second or so, even in good light.

A second may not sound a lot but it's an eternity in photographic terms. We tried to photograph some moving cars but our fi rst few attempts missed the target and all we got was a dull old bit of road. You can always set the focus to infinity and the responsiveness improves considerably, but that's no good if you are photographing something close up.

The E10's lack of responsiveness is disappointing because otherwise the image quality is good. If you shoot at ISO100 or below you'll be rewarded with bright and vibrant images. There's a little grain and colour noise in the shadows but it's not enough to bother about. In fact, look closely at a well-exposed image and it's amazing to think it came from a £105 camera. Even at ISO200 the images are good. There is a considerable drop off in sharpness towards the corners of the image but that isn't likely to worry beginners too much.

So will the Pentax Optio E10 factor in your budget? It's the lowest priced 6Mp camera on the market. It looks good, it's a doddle to use, it's pretty well screwed together and image quality compares well to cameras at twice the price. But it all comes down to that rather poor shutter response.

If you are a patient person who has time to wait for the autofocus, then the E10 will be a bargain for you. However, if you ever want to photograph anything that's on the move - and who doesn't? - then just another £50 spent on a speedier model could save you a lot of frustration.