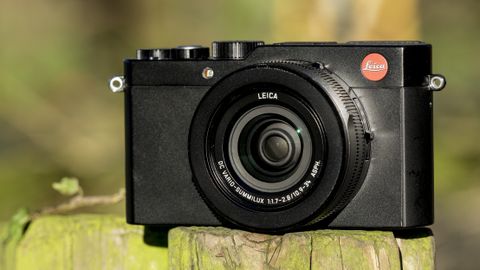 The D-Lux is a delight to use and it produces high quality images, but the Panasonic LX100, which has the same spec, feels safer in your hand thanks to the front grip that's missing from the Leica camera.

Compact cameras with large sensors are all the rage at the moment because they are capable of delivering the same image quality as an SLR or compact system camera, but usually have a smaller body and a fixed lens.

And some, like the Fuji X100T and Panasonic LX100, manage to combine this with traditional controls, making them especially attractive for enthusiast photographers.

The Leica D-Lux (Typ 109) is a rather unusual camera because, thanks to a working agreement between Leica and Panasonic, it's almost identical to the Panasonic LX100 – one of my favourite cameras of 2014. There is a price premium to pay for the Leica model, but this also brings a 3-year warrantee and Adobe Lightroom 5 is included on a disk in the box.

The sensor is a Four Thirds-type, which means it's not as big as the APS-C sized unit in the Fuji X100T, but it's larger than the 2/3-inch device in the Fuji X30.

According to Panasonic, it's the same 16-million pixel sensor as is used in the Panasonic GX7, but it only uses 12.5 million pixels (in 4:3 mode). As it's a multi-aspect ratio sensor, 2:3 and 16:9 images use pixels that lie outside the area used by the camera in 4:3 mode.

It's done this way so that there's no resolution penalty in swapping between the different aspect ratios – on a regular camera, using anything other than the native aspect ratio effectively means cropping the image.

This sensor is coupled with a new Panasonic Venus engine which enables a native sensitivity range of ISO 200-25,000 (with expansion settings taking it to ISO 100-25,000) and 4K or Full-HD video recording.

Like the LX100, the D-Lux has a Leica DC Vario-Summilux 24-75mm (equivalent) f/1.7-2.8 lens. Like the rest of the camera, although this lens has Leica's name on it, it is actually built by Panasonic and the company has invested a lot of effort to keep size down while ensuring it's a high quality optic.

As with most high-end compact cameras, the D-Lux (Typ 109) has a collection of autofocus options (Face/Eye Detection, Tracking, 49-Area, Custom Multi, 1-Area and Pinpoint) and it's possible to focus manually. There's also a Focus Peaking display that indicates the areas of highest contrast and two zebra pattern options available to indicate areas close to burning out. Helpfully, the user can specify the brightness level that these highlight indicators operate at, running in 5% increments from 50% to 105%.

The D-Lux doesn't have a built-in flash, but a small external flashgun is supplied in the box and can be slipped in to the hotshoe if extra illumination is required.

As you would expect from a modern high-end compact camera, the D-Lux has Wi-Fi and NFC technology built-in to allow the camera to be controlled remotely by a smartphone using Leica's Image Shuttle app. Images can also be transferred to the phone for uploading to social media sites.