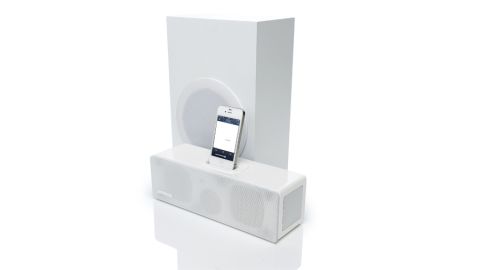 Loudspeaker soundbars are all the rage right now and it's easy to see why: they deliver oodles more oomph than the weedy audio that comes from most regular TVs.

Soundbars are packaged for the ultimate in family-friendly convenience: you get a wide speaker that's designed to sit under your TV to handle the high frequency and mid-range, and a separate cat-scaring active or passive subwoofer for the deep bass notes. That's so far so normal as far as Orbitsound's latest T9 is concerned.

What's surprising is that such a compact package can deliver such a pleasurable and room-filling sound. The Orbitsound T9 is, in essence, a more compact version of its T12v3 sibling, replacing the 605mm-wide soundbar of the original with a half-size equivalent. Even the subwoofer has been subject to downsizing, shrinking from 465mm high in the T12v3's case to just 230mm.

Incredibly, shrinking the overall size of both units has done little to detract from the its sound - and at £199, it's not only a ton cheaper than its bigger brother, but also offers a top-mounted iPhone and iPod dock as well.

At the back of the soundbar, you'll find a decent collection of connections and controls. The T9 includes analogue (RCA phono) and digital optical audio inputs, enabling you to feed it with sound from a DVD or Blu-ray player, digital TV box and so on; plus a set of spring clip terminals so you can hook up the external subwoofer.

The only real downer is that the T9 offers two so-so composite video outputs rather than HDMI for playing movies through your TV - but that's not surprising, given the price.

It's fair to say though that the first sounds you'll get out of the T9 are a little underwhelming: the external subwoofer can dominate the aural action to such an extent that it leaves the overall audio sounding closed in and muffled.

You also get a remote, too; it's cheap, plasticky and has too many similar-looking buttons, but it also enables you to tweak the T9's treble and bass controls - as well as the overall volume - so you can get the sound you want.

At both ends of the soundbar sit 25mm 'spatial generators', which take a mix of high frequency and mid-range sounds from the front-firing driver array and then send it out of the sides of the box to create a pseudo surround effect.

The aim is to eliminate the 'sweet spot' found in most home cinema or stereo sound systems that forces you to sit in a particular place in a room to get the best sound, and it almost works; movie sound and speech is rendered clearly and cleanly with plenty of bass weight from the passive subwoofer, and it performs well with just about any kind of music, too.

Our only real criticism is that the rough-and-ready remote can make it tricky to get the right balance between treble and bass.