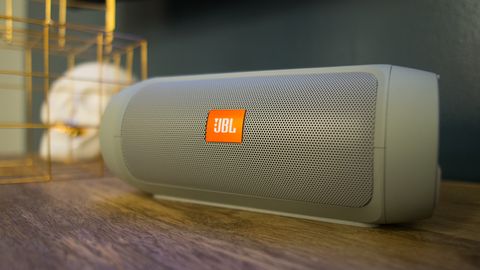 There aren't many small speakers around that sound as good as the Charge 2+ for its $150 price point. If the price still has you on the fence, its waterproofing and solid battery life should make it easier to swallow.

Smaller Bluetooth speakers have worked against this stigma for years: because of their size, they can't be taken seriously by music lovers looking for a loud, rich sound. By and large, these miniature speakers still have a long road ahead of them before that association is dissolved. But JBL proves that with the Charge 2+, it's leading the way into the future of mini yet mighty Bluetooth speakers.

The $149 (£149, about AU$202, although not available in AU at the time of press) speaker might not look like much, but it's what's inside impresses. Does the Charge 2+ offer up enough in the way of new features to tempt owners of its predecessor, the JBL Charge 2, to upgrade? Not really. But if you're looking for a booming sound in a small package, this speaker demands your attention.

You won't notice any design differences between this tall boy-shaped speaker and the Charge 2 because they are almost exactly the same. But why mess with a winning design? The only noticeable addition is the new, vibrant JBL logo.

If you missed the JBL Charge 2 when it first came around last year, the biggest takeaways were its rugged build and robust set of controls. Thankfully, those features are all intact in the Charge 2+. You'll still find the the slick, metal grille wrapping around the speaker, as well as the touches of rubber and matte plastic that make up the rest of the build.

The speaker, which can be stood vertically on either of its ends or rested flat, features LED-illuminated volume control, Bluetooth pairing and power buttons, to name a few. It's also stocked with a few other neat buttons, but some are strangely implemented.

The Charge 2+, like the Charge 2, has an internal microphone and allows you to pick up calls by pressing the phone button. Right next to it, JBL includes the "Social Mode" button, allowing up to three mobile devices to tether via Bluetooth simultaneously. These features are swell, but they make the instruction manual an almost required read. It took me a while to discover that the speakerphone button also doubles as the play and pause button.

What the Charge 2+ does best is also what we loved most about the Charge 2: sound performance. To put it simply, this speaker defies its small size with full, booming sound. Bass response is on point and fills music of any genre with a surprising amount of "oomph." The rest of the sound impresses, too. Mids are rich and highs are crisp and, better yet, raising the volume doesn't bring on distortion. It's an awesome experience, especially when you consider the cost.

Battery life is unchanged from the Charge 2. This new version features the same 6,000mAh internal battery that's capable of an advertised 12 hours of life. My experience with the Charge 2+ had it lasting just a little longer, which is always a welcomed surprise. Its big battery comes in handy if you need to give your phone or tablet some juice, but the overall battery life will take a noticeable dive as a result. It's a reasonable price to pay for bringing your devices back to life.

JBL fixed one of our issues with the Charge 2 in this new version. It's now quick to connect, whereas before it tended to take a while before the speaker connected with our paired device. Also new with the Charge 2+ is the splash-resistance. You can't submerge it, but it can withstand splashes, rainfall and even a rinse under the faucet to clean it off.

Admittedly, the price is a bit steep for an entry-level Bluetooth speaker. If you're really on a tight budget, but you don't want to miss out on features like water resistance and full sound delivery, check out the $59 (£49, AU$69) Creative Muvo Mini. Just know that you'll be missing out on the rattling bass capabilities of the Charge 2+.

Is this a worthy upgrade for those who already own the Charge 2? I say, no. In fact, I'm a little disappointed that so little has changed since last year's model. Nevertheless, if you're in the market for a Bluetooth speaker that sounds better than you'd expect for the price, check this out.