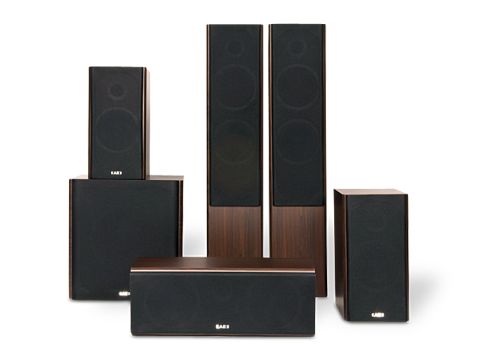 I'd rate this £1,200 array as a sensationally good purchase, especially when you throw in its sophisticated performance with music, lapping up a wide range of songs

Neo V2 is a pimped-up version of Acoustic Energy's original Neo system, which is named after Neodymium, the material from which its driver magnets are made.

Neo Mk 1 was the first budget speaker range to use this high quality, low-distortion material, and its implementation on this new version is still big news given Neo V3's invitingly affordable price tag.

Elsewhere, this Neo range has been extensively tweaked to build on its predecessor's performance, including new crossovers and improvements to the high-and low-frequency drivers (resulting in half an octave of extra bandwidth from the latter).

This system reviewed here includes a pair of floorstanding Neo Threes for L/R, a pair of Neo One standmounts for the surround channels, the Neo Centre and Neo Sub, which packs a 200W amplifier.

They're all available in a choice of two finishes: black, or the classier Vermont walnut sported by our samples. With smoothly curved edges and the Neo Three's black screw-on plinths, the cabinets have a smart, contemporary appearance. The invisible magnetic grille fixings ensure the tidy aspect and each speaker boasts a build quality to die for.

Neo Three, a two-and-a-half way, reflex-loaded design, features a 5in bass/mid driver with a twin Neodymium magnet assembly and long throw voice coils. Meanwhile, the tweeters use a dual-ring radiator design with air-core inductors, and are able to stretch to a Blu-ray-friendly frequency of 45kHz.

The Neo Centre employs an identical driver array to the Neo Threes to ensure homogenous frontal tonality. As for the subwoofer, its compact size belies its power. On the rear panel is an unusually high dial count, including controls for volume, crossover and phase, as well as notch frequency, slope and level to counter problems with room acoustics. Line input and an output phonos are also provided.

All of this brain-bending tech sounds great on paper, but what it adds up to in the real world is sensational sound quality. Paired up with an Onkyo TX-NR906, the Neo V2 system delivers a beautifully clean and dry sound, stripped of unwanted colour.

This is as neutral and refined as home cinema gets at this price, and it effortlessly does full justice to Iron Man 2's high-octane DTS-HD Master Audio track. The Neo Threes, Ones and Centre deliver a fastpaced, attacking sound, offering punchy transients and digging out detail like a sonic archaeologist.

Auditioned in isolation, their bass extension is so deep you'd be forgiven for thinking the subwoofer was involved.

But, of course, the system is at its best with the Neo Sub underpinning the action. It's a top-notch performer, driving low-end effects into the room with extraordinary tautness, heft and agility. These bass tones are as clean and solid as they come.

Check out the scene in which Tony and Rhodes clobber 12 bales of tin out of each other at the party. As they thump against walls and shoot cannons to the strains of Daft Punk's Robot Rock, the effects are rich and potent, topped off by a hearty rumble as Rhodey blasts off through the roof. Superb stuff.

Listening to the Monaco Grand Prix scene, you get a sense of what Martin Brundle feels like doing the grid walk. Formula 1 car engines rev up with a beefy roar, and during the race they zoom from speaker to speaker with no discernible difference in tone, highlighting the system's excellent cohesion.

Sharp, incisive effects, such as the buzzing and crackling of Vanko's home-made weaponry, bring zip and liveliness to the soundstage, and as he goes toe to toe with Iron Man the excitement is palpable.

High frequencies have a crisp, clean flavour and there's a delightful subtlety during quieter scenes; Tony's hi-tech workshop is alive with delicate clicking and beeping.

The Neo Centre weighs in with excellent dialogue reproduction, lending superb clarity and weight to Tony's speech at the Stark Expo.

Only one flaw to report – as Rhodes flies to the Army base after his fight with Tony, the booming rockets caused some distortion at high volume and made the Neo Three's low-mid drivers flap more wildly than expected.

Even so, I'd rate this £1,200 array as a sensationally good purchase, especially when you throw in its sophisticated performance with music, lapping up a wide range of songs