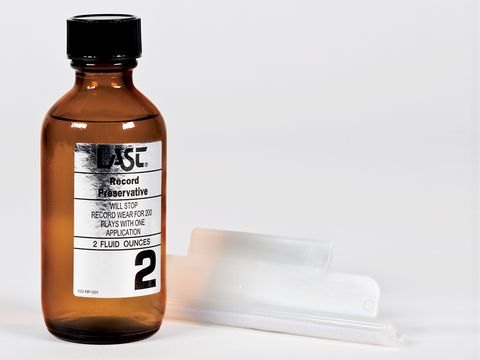 If it increases the life expectancy of treasured, discs, it's welcome, and when it's as easy and cheap as this, we recommend it heartily

The LAST Record preservative is another veteran of the analogue scene and indeed a personal favourite.

The original product from LAST, and now some 30 years old, it has been joined over the years by various interesting treatments intended to improve replay and enhance the life of both CDs and LPs.

This preservative, however, is perhaps the most remarkable product in the LAST catalogue. It is a colourless, odourless fluid that is spread on the playing surface of an LP and it is claimed that it makes the disc much more resilient against the damage that can be done by a stylus.

It leaves no residue and is very easy to apply: just half-fill the supplied pipette as instructed, squirt the Preservative on the applicator, and wipe this round the grooved area.

The fluid evaporates very fast and LAST's claim that treatment takes only 30 seconds is no exaggeration. I treated half a dozen discs, both sides, and could hardly see how far the level in the bottle had gone down, so we're looking at an impressive pennies per disc treatment cost.

But can it work? Chemically, it seems plausible, but the acid test, which I applied, is to take two fresh, identical discs, treat one and play the same section of both 30 times.

Boring – but illuminating, as the LASTed one was clearly the fresher sounding of the two at the end. Not only that, but it also seemed a little more precisely detailed even on the first playing.

In other words, it does indeed work as claimed.