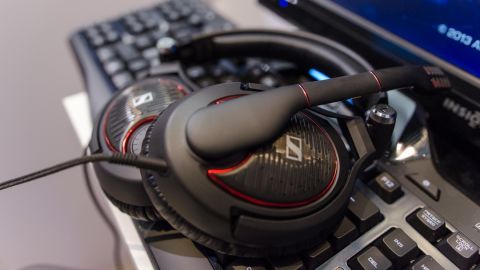 Audiophiles know Sennheiser is respected in the audio world from noise canceling earphones to massive DJ styled headphones. In the gaming world, however, the German audio company is treading new ground with its G4ME ONE and G4ME ZERO headsets. On the show floor at PAX East, I got a chance to put on a pair of Sennheiser's higher-end G4ME ZERO hooked up to an Xbox One to see how the company is fairing with its new range of gaming cans.

The pair of G4ME ZEROs I got to play with on at the convention were in a newly released black and red color. Up until now the headset has been available in white with a red accents, and a black trimmed headband. The all black finish is little less flashy than its white variant but overall the G4ME ZERO is still a fashionable gaming headset. The backs of the ear cups are designed with a grill pattern to give them a bit of flair. A rotating volume knob also accents the right ear cup. Meanwhile, the left side has an attached microphone, which when raised will mute any voice chat coming from the player.

Both earpieces are attached on a rotating and folding hinge. This allowed me to take off the headset and flatten the ear cups on my chest whenever I wanted to take a break from all the gunfire in Call of Duty Ghosts. After taking them off I could also take turn the cylinder shaped hinge to fold up one of the earmuffs towards the headband. This makes the headset a smaller package for carrying, as it's roughly an inch tall when all folded up.

As for actually wearing the headphones, the G4ME ZEROs are impeccably light thanks to their all-plastic build. The ear cups on Sennheiser's are cavernous and should completely envelope even the largest of ears. G4ME ZEROs a joy to wear thanks to the soft leather lined ear cups and plushy padding.

Unfortunately on the sound front the G4ME ZEROs are a bit limited compared to other gaming headsets. The Sennheiser headset only delivers 2.1 stereo sound where as much of its completion boasts 5.1 and even 7.1 stereo-surround sound. Despite this limitation, the G4ME ZEROs still deliver great audio quality.

On the show floor I was able to hear the low, plodding music during the quite moments in Call of Duty Ghosts, and then every bullet sent whizzing in game was followed by a punctuated thump. Additionally, the closed ear and closed back - meaning the headphones' earmuffs cover your ear entirely and exterior of the ear cups are sealed – design of the G4ME ZEROs added a surprising amount of noise isolation.

Designed for the primarily for the PC, Sennheiser recently released a new $15 (about £8/AU$15) connector called the PCV 305. With this in hand, gamers can hook up the headset directly to the Xbox One controller without needing to go through Microsoft's proprietary adapter. The headset itself is price for $279 (about £166/AU$296)

The Sennheiser G4ME ZERO feels like a superbly premium quality gaming headset. It's extremely light and comfortable to wear. Plus it also delivers amazing audio quality across the entire range from quiet moody music to in your face explosions and gunfire.

However the biggest hurdles for it are its high price-point and 2.1 stereo-sound. There are simply better equipped and cheaper alternatives. For the same price Gamers can pick up the Astro A40s for nearly the same price, meanwhile, PS4 players left out in the dark should check out the Turtle Beach PX4.

The lack of surround sound, mix options, and digital signal processing might be a major disappointment for some audio serious gamers - but these could just be small quibbles. I'll have to put in some more listening hours to hear if these limitations really affect the Sennheiser G4ME ZERO's ability to output great sound.