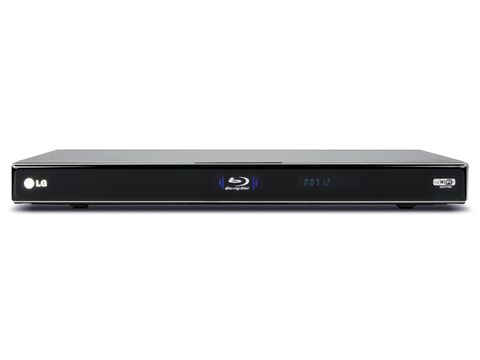 LG was an early advocate for network Blu-ray players, and with the BD570 it has continued to hone this vision.

The result is a disc spinner that equals or exceeds many dedicated network media streamers. If you have music or video files on your PC or a NAS (Network Attached Storage), as well as a significant disc collection, this do-it-all deck could be a perfect buy.

The BD570 is remarkably small. The design is smart and tidy, with the disc tray to the left of the fascia and a USB input for media playback on the right. This same USB slot has to be used for BD-Live downloads as there is no onboard memory.

Even more surprisingly, there is no USB slot on the back for you to add your own. This is an odd lapse in judgement on what otherwise is a well thought out product. Having to swap out BD-Live storage for a media flash drive is inconvenient and could be avoided with the inclusion of another rear-panel USB (or internal memory).

The BD570 is DLNA certified and can stream content from other DNLA devices on your home network, using either a wired connection or via the onboard 802.11n Wi-Fi module.

File support is fairly comprehensive and covers the following extensions: .avi, .DivX, .mpg, .mkv, .mp4, .wma, .jpg, .jpeg and .png. The player will also play AVCHD camcorder footage and can be registered online to play DivX VOD content. MP3 and WAV are both catered for, although there is no support for FLAC audio files.

The player can also access content through LG's NetCast online portal. This is not overly populated at present and includes YouTube (which is made easy to search through a virtual keyboard), Picasa and the surprisingly engaging Accuweather app.

The user interface on the player is good, with bobbing ice-cube graphics that represent functions. Movie, Photo and Music enable you to browse for media; Home Link inspects your network for plug and play devices as well as DNLA compliant PCs and NAS devices, while NetCast takes you to LG's own content online portal.

Stick in an audio CD and the player will automatically pull album art from the Gracenote media database. You can also interrogate Gracenote for album art when playing music files, provided the files are on USB. The BD570 will not scrape the database if you're accessing files over a network.

Similarly, when album art for a music file is found on a USB device you can only see it within an Info pane. Such discrepancies in operation and use make the BD570 not quite the seamless multimedia experience you might hope for.

Another feature of note is Music ID. During a movie you can hit the Music ID button on the remote and ingeniously the player will pull down detailed soundtrack information from Gracenote.

This is also a fine disc spinner when viewed via HDMI. While it's not videophile grade, even in a high-end cinema environment the player doesn't disappoint.

The opening sequence of The Dark Knight, combines challenging motion detail (the initial skyscraper zoom) with rich levels of detail and the LG doesn't stumble.

Significantly, BD loading time is very rapid. The deck awakes and tray ejects in just five seconds. Our BD disc was up and playing in a very acceptable 50 seconds, although, this is Java dependent.

DVD playback is rather good, too. Although SD pictures can be noisy, deinterlacing is excellent with no overt jaggies. Consequently, images upscaled to 1080p look great. Shakespeare in Love (Superbit edition) has a telling opening sequence that spirals down into the Rose theatre. As the camera glides past the wooden balustrades, edges on the LG's upscaled image are smooth and well defined.

CD playback is best heard over an optical link (there's no anti-jitter over HDMI tech onboard) and can be considered functional. Our Tech labs found analogue audio jitter to be relatively high at just under 1,200ps.

However, any audiophile grumbles should be balanced against the coolness of the Gracenote album art presentation. Blu-ray audio decoding includes Dolby Digital Plus, Dolby TrueHD and DTS HD MA.

Setting the player up to bitstream out is confusing, as the menus choose not to talk about bitstreaming. Instead you should set the audio to Primary Pass Thru. The deck can also be configured to filter the sampling frequency on the digital audio output.

The LG570 is basically two products in one slimline chassis and as such can be considered excellent value; its integration of both physical media and file streaming gives it distinct advantages over dedicated products.

The player's interface is neat and very ease to use. As a Blu-ray player it does a fine job, significantly delivering clear images from hi-def discs.