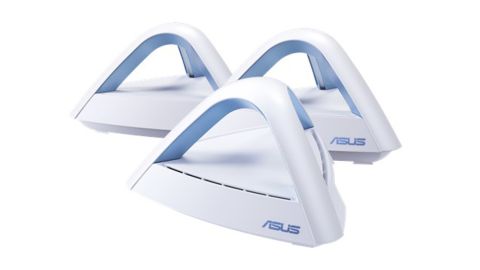 The distinctive look of the Lyra Trio hides reworked internals, but Asus is in danger of lagging behind the pack in terms of consistency.

The Lyra Trio Mesh WiFi system is a triple hub, dual-band kit that follows up from the original Asus Lyra Home Wi-Fi system that was released in 2017.

This new kit is more affordable than its predecessor, but drops a few more esoteric features in order to do so, including MU-MIMO (which will be a turn off for some).

This is a Mesh Wi-Fi solution, which means that the three hubs work together to provide seamless coverage for your whole house, and Asus believes this kit is ideal for a large, 2-3 story home (375 square meters).

One unit needs to be connected to your router, but the others can be placed wherever works best for you, and each unit boasts an RJ45 Ethernet port, for physical connections if you’re not happy staying completely wireless. The actual setup up and configuration of the network is handled by the Asus Lyra app, which is clear and easy to use, while also offering a reasonable amount of stats for would-be network managers.

Asus is a well-respected name, with good connections with plenty of major outlets, which means that you shouldn’t have a problem tracking down these units.

All the usual suspects (Amazon, Newegg, local resellers) have the Lyra Trio kit available at competitive prices, and at around $253 (£270, AU$340), the kit is reasonable value for money for a triple-hub solution.

If you have a bigger area to cover, then you may want to pick up additional individual units, which are available for around $130/£100/AU$170 each.

Alternatively, if you have a smaller home, than just a pair may provide enough coverage, although this would add up to being more expensive than just buying the triple kit we’ve reviewed here.

It’s worth spending a bit time of talking about the design of the Lyra Trios, as they make for a significant break from what has quickly become the norm.

Look at other mesh hubs, and they tend to favour squat cylinders. Indeed the previous Lyras sat in that groove too. So why has Asus decided to go for something a bit more space-age/steam iron-like? Apparently to accommodate angled antenna, as each of the three sloped pillars is actually home to one.

The obvious question is, do these hubs look good when placed around your home? That question isn’t so easy to answer.

The benefit of the common cylinder look is that they could be any piece of tech at all, from a smoke alarm to a Bluetooth speaker. We’re used to such kit being around our homes, and generally don’t give them a second thought.

The Acer Lyra units stand out far more than that, although that’s not necessarily a bad thing. They are pleasingly finished, and thanks to slots on the underside can be wall mounted if needed, so there are some good options for how to place them throughout your home, but personally we prefer the subtle approach of other kits.

One area where Asus does get an unequivocal nod of approval is in the fact that the units can be controlled via the app or by a web interface by pointing your browser at a specified address.

While we’re fine with the general shift to the app model, being able to query your devices directly from your laptops and desktops just feels that little bit more serious, and means you’re not having to hunt down whatever device you used to set the Lyra Trio up with in the first place.

It’s a shame therefore that this isn’t implemented quite as brilliantly as it could have been. There are certain things you can seem to do in the web interface, that you can in the app. Turning of the LEDs for example.

In fact, while we’re on the subject, you can’t automatically dim these like you can with the TP-Link Deco M5 and M9 at certain times of the day, which is annoying, particularly if you have a hub in your bedroom (the LEDs are really bright).

Here’s is how the Asus Lyra Trio fared in our brief suite of tests (conducted on a 80Mbps service):

To say the performance of the Lyra Trio was erratic would be an understatement. When testing from various locations throughout our home we would see high performance and few inches one way or another, barely any connection at all.

The supposed seamless hand-off between different the different hubs would sometimes leave us with no connection at all as well, which is disappointing, as “seamless roaming” is a big selling point of the kit.

The frustration with the system is best summed up by our two main testing sites though: one set of tests is done just 5ft from the hub, with a clear line of site (using a laptop, and in this case for verification a tablet as well).

The other site is 13ft away with multiple walls in the way, to a desktop PC that connects to the hub using an Ethernet cable. Somewhat confusingly we had no problems with the performance of the fixed system that was further away: It offered performance on a par with the likes of the M9 and M5 Deco kits, at least for download speeds,though uploads were a little off the pace.

The closer test was consistently poorer when it came to downloading (although uploads were better).

The overall design of the Lyra Trio is striking, and could appeal to a slightly more techy audience. The units are incredibly simple to get up and running, and the fact that they offer web and app interfaces for tweaking the settings is welcome.

We’re impressed by the lifetime protection as well, as this is the sort of feature that can add up for competing units.

However, our frustration with the performance of the Lyra Trio ultimately holds us back from recommending it wholeheartedly, even though it can offer strong performance that’s on a par with more expensive, and more capable solutions. The whole interface experience could benefit from some consistency improvements too,

This kit is easy to get up and running, and there are plenty of options and settings for you to play around with if that’s your thing. The big problem though is the performance. When it’s working it’s great, but it’s inconsistent, and we experienced enough dropped connections to know that this has the potential to really frustrate.