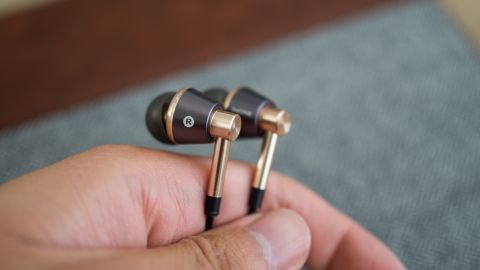 The 1MORE Triple Driver in-ear headphones serve up stellar audio, great build quality and an attractive design for not that much money.

If you're in the market for a pair of in-ear headphones that are under $100 (£70 or AU$150), you've got a lot to choose from. There are tons of earbuds that sound great, but many at that low price usually have a fatal flaw, whether it’s less-than-stellar build quality, incompatibility between devices or they simply don’t fit your ears well enough to be comfortable. We've found it’s hard to find a pair of headphones that tick all of the boxes without breaking the bank.

But all that changed with the 1MORE Triple Driver In-Ear Headphones. If you haven’t heard of 1MORE, listen up because it’s a company that deserves to be on your radar.

1MORE offers a range of over-ear and in-ear headphones, but the stand out of the bunch are the Triple Driver in-ear headphones. We spent the last few weeks with them and were blown away at how much they offered at the price range.

The 1MORE Triple Driver in-ear headphones feature a handsome design that is subtle yet stands out when you get your hands on them.

The earbuds themselves are milled out of aluminum and feature a rose gold color. (And no, it’s not the pink color that Apple tries to pass off as rose gold with the iPhone 7 but the actual color of gold mixed with copper.)

The earbuds themselves are angled and offer a nice fit in the ear. They don’t sit completely flush, and they stick out very little. While that means you won’t want to sleep with the Triple Drivers, they maintain a nice low profile with your ears.

Moving on to the cable, 1MORE opted for two different textures. The cable from the Y-connector to the straight 3.5mm jack is sheathed in fabric for durability but the cables leading out of the Y-connector to each earbud are rubber. We’re not fans of rubber cables as they tend to snag on clothing or on itself. The 1MORE Triple Drivers are guilty of this, but it’s by no means a deal breaker.

Here's where we find our one and only flaw with the headphones: The remote is made of plastic and feels cheap, especially compared to the 1MORE Quad Driver headphones which have a remote made of aluminum.

The Triple Drivers feature a ton of silicone and foam eartips in the package as well as a nice hard case for travel. The foam eartips aren’t very good as they’re shallow and don’t seal very well in our ears. Thankfully, the myriad of included silicone tips are more than enough to find a good fit for proper bass response.

Sound quality is where the 1MORE Triple Driver stand out. While the balanced but slightly warm sound signature didn’t blow us away at first, we came to appreciate the balance and detail provided by the Triple Drivers.

Music is exquisitely detailed with a good sense of space. Instruments are layered and complex songs don’t sound muddled as each instrumental layer remains audible. While there are more detailed in-ear headphones out there, you’ll have to pay much more for the minute increase in performance.

The mids are lush and work to highlight human voices. There’s a slight mid-bass bump that give the 1MORE Triple Drivers a warm tonal balance, even more so than the 1MORE Quad Drivers.

Speaking of the Quad Drivers, the Triple Drivers can’t match them in terms of detail, space or balance – but the differences between the siblings are so small that it’s really hard to fault the cheaper Triple Driver. If you want more overall refinement, detail and build quality, however, go for the Quad Drivers.

Bass is very good with great extension and impact. The mid-bass bump helps give the headphone an overall warm sound without it taking over.

Last but not least, the 1MORE Triple Drivers create a nice seal to help seal out noise. While they don’t feature any active noise cancellation, the passive noise isolation is more than enough to drown out the world during your commute.

For $100 (£100, about AU$168), it’s hard to think of a better sounding and built headphone than the 1MORE Triple Driver. That said, if you want just that little extra refinement and luxury materials, the 1MORE Quad Drivers are still a bargain at twice the price.

There’s very little we can fault the Triple Drivers for. Its rubber cable is annoying and its remote control feels cheap but these are just nitpicks. For the money, it’s hard to do better than 1MORE's Triple Driver in-ear headphones.