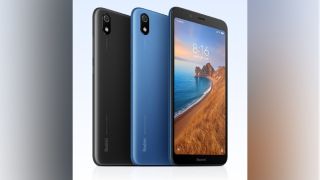 Xiaomi has revealed its upcoming budget phone, the Redmi 7A ahead of its official launch alongside the much awaited Redmi K20, on May 28. The 7A succeeds Redmi 6A which was launched in June 2018 and went on to become the bestselling phone across Xiaomi's catalog. Now, with the Redmi 7A, the company aims to disrupt the entry-level smartphone markets once again.

Redmi 7A features a 5.45-inch HD+ (1440 x 720 pixels) display with an aspect ratio of 18:9. This means the phone does not have any kind of notch cutout that has become an intrinsic part of modern smartphones.

It is powered by Qualcomm Snapdragon 439 chipset paired with 2GB/3GB of RAM and 16GB/32GB onboard storage. Users can further expand the storage of the phone by upto 256GB via microSD card. Redmi 7A runs on Android 9.0 Pie based MIUI out-of-the-box.

The phone comes with a 13MP rear camera and is supported by a LED flash. On the front, there's a 5MP selfie camera.

Redmi 7 has a 4,000mAh battery at its disposal which coupled with the power efficient Snapdragon 439 will enable long-lasting battery life.

In addition, the Redmi 7A has a P2i coating which will prevent it from regular splashes of water.

Xiaomi will announce the price of the Redmi 7A on May 28 along with the Redmi K20 in China.