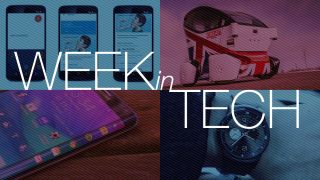 This week we discovered that Google wants to be your doctor - but it also quite enjoys kicking robots, with predictable consequences of the "robots are going to KILL US ALL!" variety. While we wait for the inevitable robot apocalypse, at least we'll have hi-res audio to listen to, and a brand new Samsung smartphone to listen to it on. It's a terrified of Terminators week in tech!

If you've ever Googled minor health symptoms such as a bit of a sniffle, you'll know that the answer is always cancer - but that's about to change with the arrival of Doctor Google. Google is using its Knowledge Graph to improve its health-related results, and it's worked closely with proper doctors to ensure you get the facts and essential information. With US kids currently falling victim to measles thanks to celebrity-fuelled parental stupidity, it couldn't come at a better time.

High-res audio is the latest trend in digital music, and streaming service Deezer is the latest bandwagon jumper: its Elite service promises lossless, high resolution files via the magic of FLAC. It's not the only such service: Onkyo and Tidal do it too, and it's currently Sonos only, but it's clearly part of a wider trend. We're hearing rumours of a higher-res iTunes from Apple, too.

Streaming is the new rock'n'roll

Streaming music's popularity (with punters, if not artists) is off the charts, so now it's going to be in the charts. The UK singles chart already counts streams, but now the album chart will do it too. As Ian Morris says, that should make some artists pause before deciding to boycott the streaming services.

On no, Wear is woe

Bad news for Android Wear: nobody's buying it. The Apple Watch isn't even out yet, but sales of rival devices are already struggling. In all of 2014, just 720,000 Android Wear smartwatches were sold out of 4.6 million wrist-worn wearables, and those figures include devices that we're sure are already gathering dust on a shelf somewhere. To be fair you wouldn't expect really massive numbers from such a new category, but the figures do suggest that the hype is currently way out of proportion to actual sales.

Samsung: the only way is S6

With just two and a bit weeks to go before the Samsung Galaxy S6 is officially unveiled, more details are emerging. How does a 20MP snapper sound? At least one prototype S6 is packing one, and it's got optical image stabilisation too.

The camera app will apparently get a new Pro mode too, and Samsung also promises much more useful automated shooting: apparently we'll be able to take amazing pictures without any fiddling at all. Other rumours suggest a dual-camera setup, but we suspect that's because somebody's mistaken the fingerprint sensor for a second lens.

Who's afraid of self-driving cars?

We are, quite frankly. Hugh Langley says what we're all thinking: "the idea of bequeathing my safety to a robot seems ludicrous." As he explains, while the tech could react more quickly than humans, "I'm scared car AI is susceptible to more dangerous things - malfunctions, dodgy firmware updates, questionable moral choices, murderous dispositions - you know, the usual rational fears." There's also the question of who gets to program them. "Who gets to guide the car's moral compass? Does the car hit the child to ensure the safety of the middle-aged driver, or does it swerve…?"

After this human-on-robot violence, a robot vacuum cleaner attempted to hoover up a sleeping woman's hair in South Korea. Robotics experts tell us the two stories aren't connected, but then they would say that, wouldn't they?

From pants to PCs: the perfect Valentine gifts

What do you mean, you haven't ordered anything for Valentine's Day yet? With just hours to go, our Valentine's Gift Guide might just save your relationship - unless you order something truly terrifying from one of the, ahem, more adult product ranges, or if you go completely mad and order a fitness tracker that suggests the love of your life could do with losing a few pounds. Happy Valentine's Day!