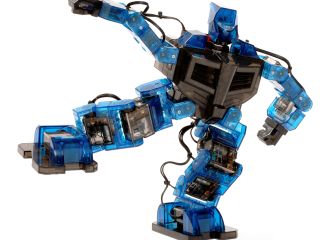 One of the coolest new educational gizmos on show at this year's British Education and Training Technology (BETT) was a break-dancing MechRC, designed by UK robotics specialist Dr Jim Wyatt.

The new MECH RC robot was one of the coolest toys we caught sight of at CES earlier this month. Wyatt's awesomely-named company Kablamm Ltd ('Hi-impact technology solutions') was at CES 2009 courtesy of a UK Trade and Investment competition.

It is good to see that not only is Kablamm marketing its MechRC to gadget freaks, but also showing how it can be used productively in the classroom to engage teens in maths, physics, design and engineering.

Kablamm's robot has been available for around £400 to robot freaks for a couple of months already, but Wyatt hopes that its value as an educational-aid will also inspire schools and teachers to make us of it in the classroom.

"The fact that the MechRC is a humanoid robot and not an old-fashioned 'turtle' style robot is key," Wyatt explained to TechRadar. "Kids are bored with those type of things, whereas back in 2001 or 2002 they seemed to be cool, when Robot Wars was popular on television."

ED-E can be very easily programmed to jump or perform (massively pleasing) back-flips or head-spins – with kids programming ED-E's 17 servo motors with an Xbox-a-like control pad.

"It is particularly difficult for kids – and adults too – to conceptualise three-dimensional maths and physics problems," says Wyatt. "Programming ED-E and then watching how the movements play out in front of you makes understanding the maths and physics behind it much easier and much more fun."

An educational software package lets kids program and preview ED-E's moves on screen before setting him off jumping, spinning and even playing football!

ED-E will cost schools (or big kids everywhere) £428 – slightly more than the £400 price-tag of the consumer version, due to the bundled educational software package.

ED-E is being launched to the UK educational sector at BETT 2009 by Research Machines (RM). TechRadar has requested a review sample, so we will let you know what our educational tech specialists make of his educational value in the classroom.

Maths and physics just got a whole lot more fun. Check the cool ED-E video demo over on YouTube.