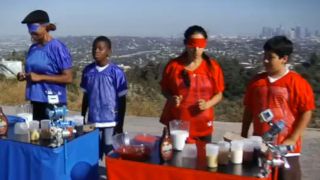 Nothing to do with phones, as far as we can tell

Come on down – Microsoft appears to have decided that the best way to convince you to buy a Windows Phone is not by showing off its features, but by blindfolding some mums and getting them to make a packed lunch. We'll have some of what that marketing team is having, please. [TNW]

Fight for your right - Kim Dotcom has made a music video in which he seems to be likening himself to Martin Luther-King and the shut-down of Megaupload to segregation. Yeah, they're the same. [YouTube]

Pop will eat itself – If it Instagrams itself then has that picture made into a chocolate bar by Cocoagraph and then eats it, that is. [Design Taxi]

We've wasted our lives - If we hadn't stopped playing Tetris when we retired our GameBoys all those years ago, we too could have featured in Ecstasy of Order: The Tetris Masters, the gripping high-level Tetris documentary that is out now. Side note: in these post-50-Shades-of-Grey times, we'd advise you to use the source link rather than searching Amazon for Ecstasy of Order. [Indie Blitz]

Where's you bin - We'd like one of these modded Kinect-controlled wastepaper baskets that tracks and catches rubbish you chuck in its general vicinity for next time we're struck down with a cold, please. [The Verge]

Various virus - We're all for a bit of personalisation but this is taking things a bit far – malware creators are starting to make signature-less viruses that appear differently on every machine they infect, proving a real headache for anti-virus firms. [Technology Review]

Glovely - A special glove and new 'G-Speak' software is basically all you need to make like Tom Cruise and wave, flick and point your way through massive data-sets like a real life Minority Report. Of course, people might just think you're channelling a Dixons call centre worker… [Yahoo]

Yak Yeti Yak - We quite like the look of LoYakk, an IM-type app that lets you 'yak' (see what they've done there) with friends and other attendees at the same venue as you. But it'll require a lot of people to sign up for it before it's all that useful – until then, you could just go on Twitter. [LoYakk]