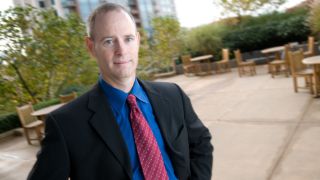 Microsoft has slipped behind Google, but Frank Shaw has plans to push back

Talking to Frank Shaw, it seems that Microsoft is starting 2013 in combative mode. "If I'm going to have a party with my Facebook friends, it looks like a lot of fun. I have a lot of Facebook friends. And then a party with my Google+ friends, I could probably have in a rowboat…" says Microsoft's comms chief (full job title: corporate vice president, corporate communications).

Microsoft could reasonably take a breather this year after the effort of shipping Windows 8 and Windows Phone and refreshing almost its entire product line in 2012. That, however, is not the plan. Shaw gives us a few hints about the coming year – and some clues to understanding Microsoft's wider strategy. "2013 is going to be a big year," he promises. "Yes, we shipped a bunch of stuff in 2012 but there's more coming."

"We've got some new stuff coming from Bing that is interesting and provocative and continues to move the needle in terms of how people think about search. And you have the work that we are doing with Skype. The move of Office to the cloud, Office as a subscription service for consumers and all the things that come with that; it's a big deal. And with Xbox we have more we're going to do. We're certainly not done with thinking about the living room and we'll have more to say about that as the year goes through."

One criticism of Microsoft is that it's failed to produce an integrated product line like Google's, and has consequently fallen behind. That is an issue that 2013 will address, says Shaw. "Across Windows and Windows Phone there is this entire ecosystem that really has received a jolt of adrenaline. We always think about the launch of Windows as the starting line.

"There's more new hardware, there's more new applications, you see momentum in the app store, people are starting to look at it and say, 'Wow, that's pretty cool. I can do things with it I couldn't do before and now I'm going to experiment and bring new things in.' I think you'll see a ton of that over the next year."

Unsurprisingly, he wouldn't give us any specifics about Windows Blue (the possible codename for Windows 9) or even if we'll see new versions of Windows more frequently. "I don't know that I have anything new to say there. You have certainly seen across a variety of our products a cadence that looks like that; Windows Phone is a good for example of that. When we're ready to talk about how that looks more broadly we will, but right now you just have to look at what we've done in those areas."

But more frequent updates (something Microsoft is also doing with services like Bing and SkyDrive) wouldn't mean only getting incremental improvements and sacrificing big innovations, he maintains. "It's like this concept of punctuated equilibrium. You get a series of improvements and then you have to find a way of punctuating them and having a jump, and then you start that improvement cycle again. You have to plan for both.

"Sometimes those jumps are enabled by new hardware capability or by new demand that we see in the marketplace or something that we want to create. You have to think really carefully about how you consistently improve the product that you have, and how do you make that big jump forward and when you make that big jump forward, how do you do it in a way that is not discontinuous with your users."

"But there's always this moment when you make the jump and everybody looks at that and says 'that makes me nervous' or 'that change is hard'. We certainly see some of that as well. But we're committed to building not just for the next month but for the next 18 months, 36 months - whatever the time is on this new platform."

Current page: What comes after Windows 8?