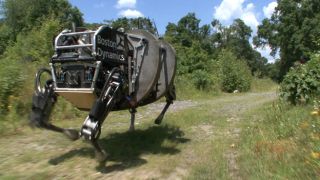 Google had a superb year in 2013, adding around 35% to its share price and producing some fantastic devices, but where does it go from here?

Mountain View has spent much of the last year joining up its products, so 2014 will likely see more of their rhetoric becoming a reality – perhaps not through new products but features added to their current line up.

It wants to integrate its services with more aspects of your life, so climb aboard as we make ten Google-shaped predictions for 2014.

The recent release of Android 4.4, codenamed KitKat, was a relatively minor update to Android, as Google sought to perfect its mobile OS – and it was a disappointment for those who were hoping for a shiny new version of Android.

However, it's now even more likely that a fresh version of Android will land mid-2014, possibly at Google I/O. What's more, as each version of Android is codenamed with a dessert or confectionary following on alphabetically from its predecessor, it creates obvious speculation about which L-based sweet it could be.

It could be "liquorice" but we'll put our money on "Lion Bar" after the recent love-in with Nestle.

Between Android 4.1 and 4.4, the look and feel of Android hasn't altered much, so expect this to be a big part of Android 5.0, perhaps echoing iOS's colourful design after year's of Android 4.0's gloomy all-black theme.

Google's had a good year with Chromecast but expect much bigger things in 2014. Aside from the obvious global roll out, Mountain View has already said that it's looking to create an open SDK, so third party developers can create their own apps and uses for Chromecast.

The result, at least in the short term, could be app streaming from a much bigger pool of core Android apps, which means you'll be able to enjoy what you see on your phone in the comfort of your living room. What's more, Android 5.0 could see app streaming features as a key improvement.

3. Google does the robot

December's purchase of Boston Dynamics, the robot-building super-brains responsible for BigDog and the Cheetah Robot might have raised a few eye-brows, but 2013 has seen it suck up a slew of small robotics businesses.

Google insiders have called this spending spree a "moonshot' headed by Andy Rubin, the brain behind Android. However, the New York Times has it on good authority that Google wants to shake up the manufacturing industry.

"While Google has not detailed its long-term robotics plans, Mr. Rubin said that there were both manufacturing and logistics markets that were not being served by today's robotic technologies, and that they were clear opportunities," wrote John Markoff.

So what does that mean for 2014? Well prepare to see Google more active in the business market and watch out for nifty advances in the driverless car project, that has come out of Google X.

From Google's "moonshot" comes a much safer bet: that the unloved Nexus 10 will get an upgrade in 2014.

The 10-inch iPad rival hasn't had much love from Big G, and never managed to permeate the tablet market in the same way as its little brother the Nexus 7. However, the previous generation of the Nexus 10 was a well-built device, which if put on a serious diet, could rival the iPad Air.

All signs are pointing to a huge power boost, with Sanpdragon 800 and 3GB of RAM all tipped for the new Nexus, which could land as early as CES in January!

5. Google Glass finally gets a release

One of the most exciting gadgets of 2013 was the Google Glass, but it only made it into the hands of select developers, so will 2014 be the year the public can get their hands on Glass?