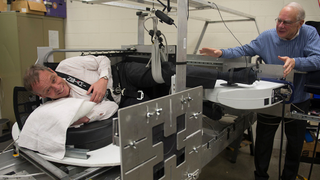 Engineers from the Massachusetts Institute of Technology have designed a rather unusual exercise bike. For starters, it's mounted sideways on a plate spinning at 32 revolutions per minute.

It's part of a test to see if we might be able to fake gravity in the gym module of the International Space Station by using centrifugal force. While astronauts spend a significant chunk of each day working out, many still suffer bone loss and muscle atrophy from the effects of microgravity.

"With exploration-class missions, like Mars, where you're gone for three years, you could run the risk of having astronauts not sufficiently conditioned to perform effectively, and also to not be in good health when they finally get to the surface of Mars," said Laurence Young from MIT's Department of Aeronautics and Astronautics. "You really don't want to send a jellyfish to represent us on another planet.

To try and combat those effects, Young has mounted an exercise bike inside a centrifuge that's been carefully built to fit inside a module of the ISS. Twelve healthy subjects stepped inside, including Swedish astronaut Christer Fuglesang, for tests to see if it made any difference to the health effects of space travel.

They found that the contraption should be able to significantly lessen the effects of extended weightlessness in space - more so than exercise alone. They also suffered little motion sickness, even while spinning at relatively high velocities.