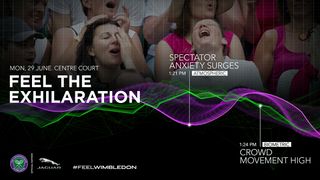 The Wimbledon Championships of Tennis kick off today, June 29, in Wimbledon (obviously), London.

In years past, this would mean strawberries, Pimm's, immaculate greensward prowled by finely-honed, playboy athletes, watched over by blazered men on very tall chairs with tables on, like they're absolutely enormous babies with a tennis fixation.

This year, it means all those things, plus being able to track the excitement of the occasion on cryptic, wobbly graphs.

That's thanks to car brand Jaguar and its partner, media agency Mindshare. The latter will be strapping GPS-enabled step counters with heart rate monitoring to punters and has also buried sensors around the courts to measure volume levels, crowd movements and, for some reason, "infra-red". Finally, it's monitoring the world's social feeds, taking the temperature of the online conversation around Wimbledon. It's all under the #FeelWimbledon banner.

Head to Jaguar's bespoke Wimbledon website now and you can truly feel the excitement, via the gift of psychedelic, wobbly lines, a bit like playing grids from later versions of the the video game Tempest. Want a more granular view? Move from the Live Feeling view to All Feeling and see how excitement builds on Centre Court, Number 1 Court and "The Hill" (aka Henman Hill, aka Murray Mound).

What we should see over the coming fortnight of racquet-based magic is live psycho-geographical-biometric feedback on how the crowds are feeling: the raw, nerve-shredding tension as an epic match goes into its fifth set. The elation as home favourite Murray overcomes a rival. The shattering disappointment as he then goes out to Djokovic in four sets.

In short, it's looking like a vintage year for Wimbledon, and a vintage one for graphs, too.