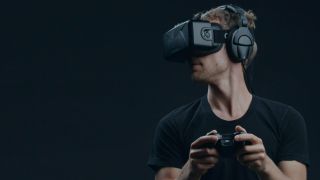 Update: Or not. Facebook CTO Mike Schroepfer has taken to Twitter to state that he didn't intend to announce a release date for the Rift. All he meant to say, apparently, was that PC hardware capable of running powerful VR experience is available this year.

He added, "sorry if it was confusing but don't know exact dates on these things yet". Hmmmm.

Schroepfer wasn't 100% clear that it would be the final Rift releasing but his statement was more telling than Palmer Luckey's recent response about the VR headset's 2015 launch.

This seems to fall in line with John Carmack's earlier hint that we can expect to see the Samsung Galaxy S6 Innovator's Edition of the Gear VR (S6) at the end of year as well.

Keep in mind, anything that does launch will still be a developer's kit and not a completed head mounted display.

VR can be better

Oculus Chief Scientist Michael Abrash gave a short presentation on human perception and its importance to VR, ending the keynote by reiterating that Oculus Rift will be shipping soon. He was also carefully vague and focused on how virtual reality still has a long way to go because its "just barely good enough."

However, Abrash also said that VR can "potentially change the world" and is progressing more than it previously has. With improvements made to haptics, visuals, audio and tracking, Abrash is confident VR as a platform will succeed.