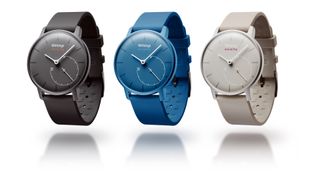 2015 is the year of the wearable. But with smartwatches from £200 and up and Apple Watch likely to be more than that, keeping abreast of this trend could get expensive. Well, that's fashion for you.

But fret not, as a new wave of wearables is crashing over the horizon, and they're more affordable than ever. From smartwatches that are half the price of rivals to fitness trackers that cost less than a round of drinks, these are easy on the wallet, yet still stylish and fairly bristling with smart skills. Buying them all won't make you the Six Million Dollar Man; it'll be more like the £530.90 man. Which is much cheaper to rebuild.

Smart bracelets are ten a penny, but this one could save your life. It keeps tabs on how long you've been out in the sun and tells you when to hide in the shade. Fire up the app and you'll get advice on the optimum SPF to use given the UV levels, and when to don a hat and sunnies. If only it could do your back as well. It's designed like a precious jewel and comes in three colours: platinum, gold and gunmetal. At £72, it's an absolute steal.

Not only does the Flash pack the same fitness tracking and sleep monitoring skills of the more expensive Shine, it's just been loaded up with a ton of new talents. It can control your Nest thermostat, so it will detect when you wake up and adjust the temperature accordingly. It will sync with your Spotify playlist and with your Logitech sound system, so you can hit play from your wrist. More partnerships are on the way – Misfit wants to work with IFTTT (If This Then That) which would swell its arsenal by more than 160 products and services. The best £35 you can spend.

Smartwatches cost a bomb, right? Not if you get the Pop. It retains the classy minimalist styling of its suaver brother – the Activité – but is a full £200 cheaper at £119.95. The only difference is it's made of less fancy materials (PVD) and has a rubber band instead of leather. But it has an elegance all its own. Features-wise, there's nothing to choose between them: it tracks your steps and calories, and detects when you're swimming or running; it monitors your sleep; and the silent alarm buzzes you awake without disturbing your partner. Is it stretching a point to call this a smartwatch? Yes, yes it is. Just go with us.

The Lumo Lift is a posture coach – attach it to your person, and it buzzes when it detects you're slouching. It's nice and discreet, clinging to you with its magnetic clasp, and doesn't involve strapping anything around your waist. It's also a fitness tracker, counting your calories, steps and distance, and unlike most wearables, it lasts five days on a single charge. Better posture helps avoid aches and pains, and gives you a stronger, more confident look. That's got to be worth £80, right? Luckily you can find out here: the answer is a resounding "maybe".

The last thing you want during a run is for your headphones to fall out. These clip over your ears, so even if they somehow come out of your lug holes – which is highly unlikely – they will stay put. The result? Uninterrupted music and a better workout for £45. They're sweat and water resistant, so can handle any conditions, and thanks to the mic on the cord, they double as a handsfree kit, so you can take business calls on your power walk. Buy! Sell! Etc. They sound great too thanks to their high-output drivers. Why pay more?