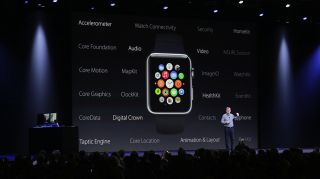 The Apple Watch is getting an update on the software side, the Cupertino firm revealed at its WWDC 2015 developer conference.

Native apps were previously announced at the Code Conference as arriving soon. Apple CEO Tim Cook confirmed SDK availability at the start of the keynote. Further details will be discussed as the conference goes on.

Apple's Kevin Lynch walked through the new "enhancements" that are coming to OS 2 and they're actually pretty exciting so far.

The software developer kit is available today with the update rolling out to Apple Watches in the fall, for free.

Watch out for these new goodies

One highlight is how the Apple Watch will be able to communicate via Wi-Fi meaning you can leave your phone in another room and your wrist will be a perfectly suitable alternative. Android Wear's latest update already supports this feature, so it's nice to see the iOS device receiving the feature as well.

A set of new watch faces with neat functions are also part of the package. You'll be able to pick an album, and a photo from that album will pop up every time you raise your wrist in addition to setting a different image from any album to appear.

Time-Lapse is the other new face that shows time lapsed images shot over 24 hours.

New "complications" or information in the tickers can now be switched up. Flight times, home controlled systems with Homekit devices can be accessed from your wrist and even your electric car charge information. The complications can be changed on the Modular face along with the majority of the other faces. This will also work with info from third-party apps.

The Digital Crown will also provide more functionality. Rotating the crown will let you "Time Travel" showing various events up to 72 hours right on the watch face.

Nightstand mode will flip your Apple Watch face to show horizontally while it's charging. The Digital Crown becomes a snooze button and the side button turns off alarms.

One option that's been sorely missing will finally make it onto the watch: email replies. Just like text messages, you'll be able to reply directly from your wrist with voice dictation, emojis and smart responses. However there's no details on whether editing messages will be allowed.

The microphone will be accessible which should makes the Voice Memo app pretty useful on the wrist.

Tiny videos and itty bitty FaceTime will also make it onto watchOS 2. Only short videos like Vines can be watched though.

Developers will now have access to the accelerometer so you can expect future apps to utilize this feature. Apple demoed a golf app that measured a person's swing.

Different vibrational feedback and sounds for various apps should arrive with the Taptic Engine being open to devs as well.

More in time, and Siri's cooler too

Workouts will be more useful with the OS 2 update. Healthkit will be available with more metrics shown on the watch and a real-time heart rate monitor will be able to stream from your wrist.

Saying the "Hey Siri" can start a workout, and can be as specific as "Hey Siri, start a 30 minute run" or "Hey Siri start a 300 calorie walk" all without needing to open the app.

Speaking of Siri, the little AI assistant will be able to provide Glances by saying "Hey Siri, show me the Instagram glance." Siri will also be able to control HomeKit devices and give you transit directions.

Apple Maps' new transit directions will show up on your wrist with more transport information and times.

The freshly re-dubbed Passbook will also be updated to Wallet in the fall.

For the popular folks who have more than 12 friends, you'll be able to add more people to your Apple inner circle right from the watch instead of adding from the app. They can even be categorized into different sets.

Digital Touch will let you use more than one color in your little sketches so people can be even more creative now.