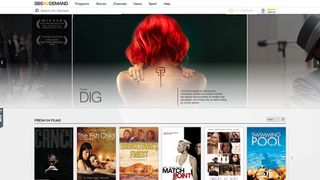 Fans of subtitles, nudity and Lee Lin Chin (though not necessarily in that order) have much to celebrate today, as the SBS On Demand streaming website has been redesigned, reinvigorated and relaunched.

The website, which is now much more responsive and optimised for touchscreen devices, is available on 22 platforms – more than any other Australian broadcaster (and probably more than most streaming services, for that matter).

SBS On Demand, which now sports a Netflix-style look, will also automatically scale down to any device that it is accessed from – simply visit the SBS On Demand website in your device’s browser and start watching.

SBS is also kicking it up a notch in terms of content, with some big-time shows hitting the service, including season three of Rectify, express from the US and exclusively premiered on the streaming service, Bosch, Masters of Sex, and catch-up titles such as The Principal, 12 Monkeys, Glue and Orphan Black.

Australians can now stream over 600 films from around the world, as well as over 350 documentaries and factual shows, totalling over 4000 hours worth of content (plenty of time to learn several new languages) – all for the price of free.

SBS On Demand also has an extensive back catalogue of titles, from B-Grade schlock horror to the best of queer cinema, and exclusive collections of curated material, such as The Way of the Dragon and IP Man in the Martial Arts Mayhem Collection, and Tiny Furniture and Frances Ha in the Hipsters Collection.