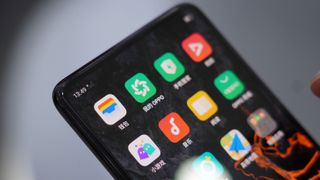 Oppo likes to show off new phone tech as much as it does new phones, and through 2019 it teased its under-screen camera technology that lets the front-facing camera sit underneath the display. We were hoping to see this in early 2020 in the anticipated Oppo Find X2, but that's now looking unlikely.

This comes from Oppo Vice President Brian Shen, who tweeted that it was unlikely the upcoming smartphone would have the under-screen camera that we were so hopeful for.

The screen on #OPPOFindX2 will still be a key focus for the device along with a lot of other industry leading features. That’s all I can say for now, but let me know any questions below. Stay tuned. 👀January 7, 2020

That's disappointing, since we were expecting the device to be pretty exciting in terms of tech. The original Oppo Find X had one of the first pop-up camera segments we ever saw, and we were hoping its successor would take that innovative spirit and run with it.

Perhaps the Oppo Find X2 will be novel in other ways – Shen says the device will have "a lot of other industry leading features" – but seemingly we're going to have to wait a while longer to see under-screen camera tech become widely available.

In fact, by reading between the lines it seems the Oppo Find X2 itself is a long way from production, as by saying "it's unlikely" to feature this tech, Shen suggests the design isn't finalized. We were hoping to see the phone at MWC 2020 in late February, but by the sounds of it the phone won't be ready to be shown off then.

Perhaps Oppo will have something else at MWC 2020 – we're still waiting for a European release of the Reno 3 series of devices, and word is Oppo also has a smartwatch coming soon.

We'll know for sure closer to the event, so stay tuned to TechRadar during late February, when many important phone companies will start showing off their new devices.