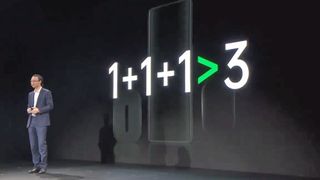 Having made serious inroads into the smartphone arena, several Chinese tech brands are now targeting the smartwatch market: Huawei has released a few watches now, Xiaomi showed off the Mi Watch in November, and now Oppo has teased its upcoming wearable.

This tease happened at Inno Day 2019, Oppo's annual developer conference where it shows off lots of the tech it has planned for the following year. Other products shown off included AR glasses, a 5G home hub, and some true wireless headphones, but it's Oppo's smartwatch that's arguably most interesting device.

Oppo's smartwatch plans were first mentioned in August 2019, in a comment made by the company's vice president, but we didn't learn much more at the time.

We didn't hear much new about the Oppo smartwatch at Inno Day 2019, and all that was shown was a silhouette of the device, but that's enough to give us a clear picture of the watch – that's because it seems to bear more than a passing resemblance to the Apple Watch.

The device seems to have the same iconic 'squircle' (squared circle) design that most people associate with the Apple Watch. We don't know much more about the upcoming wearable at this time, but it seems to be the latest of several devices that have been designed to imitate Apple's device.

All about that face

While some might be quick to dismiss the Oppo smartwatch as just another Apple Watch clone, there are reasons to be optimistic about the device – software is just as important as hardware, and just because it looks like an Apple Watch, that doesn't mean it functions anything like it.

Take, for example, the upcoming Xiaomi Mi Watch. While it looks similar to a smartwatch from Apple, its operating system is based on MIUI, an Android skin.

We're need to wait for more information on Oppo's smartwatch before we write it off as an Apple Watch clone. At Inno Day 2019 it was stated that the phone will be out in 'Q1 2020', which could means it debut at global consumer tech expo MWC 2020 in February.

Saying that, Xiaomi has said it has no plans to launch the Mi Watch in markets outside of China, and it's possible the Oppo smartwatch follows the same path, so we'll have to wait and see.