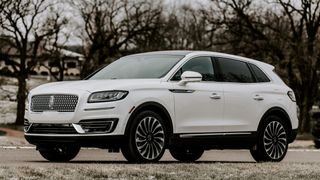 Every seemingly minor innovations in cars today puts us one step closer to smarter, more intelligent driving. It’s important to pay attention, though, because each one adds up to more computer controls, better autonomous driving, and safer transport.

On the new 2019 Lincoln Nautilus, one of those innovations has to do with the back-up camera. In May of this year, the National Highway Traffic Safety Administration made it mandatory that all new cars have a back-up camera, which allows you to see any oncoming cars behind you that are not visible with only the rear-view camera. When I drive, I always check the normal rear-view mirror and the back-up cam when backing up.

On the Nautilus, there’s an interesting perk I’ve never seen in any vehicle. It shows how one innovation – like back-up cams, which became common around 2012 – leads to more.

You can press forward on the turn signal and a nozzle sprays down (instead of up on the rear window) to clean off the camera. It’s minor, and maybe even unnecessary, but I’m impressed Lincoln (and Ford, which provides a similar option on the Explorer) thought of this.

For me, it’s one of those minors 'hacks' in the digital age that is a sign of how innovation will work. These aren't groundbreaking features by any means. In fact, the Nautilus is actually groundbreaking many other ways, including the fact that the vehicle now uses a much more powerful turbo-charged engine and has new lane-keeping measures that can keep you centered in the lane when you drive. But this is different because it taps into something that goes a step further: Solving a problem that comes up fairly often, especially in winter driving.

As we progress with automotive tech and with tech in general, it will be the minor advances that all add up to more productivity, safer driving, and a smoother experience. I remember thinking the same thing when I discovered that the Google Assistant bot can automatically figure out how long your commute takes and even where you work in the first place (by the fact that you drive there so often).

Google also knows about upcoming flights and can ping you by email or text if your flight is delayed, simply by reading your email.

I tested the Nautilus rear cam wash feature several times, and showed it to a few friends. They all said the exact same thing. They had never seen anything like that. (Many people don’t know several Lexus cars have front headlight washers and have been doing that for years as well.)

These tech innovations are not meant as parlor tricks. Rear cameras do tend to get obfuscated frequently by gunk, ice, dirt, and other obstructions. Once we start relying on back-up cams more and more or even use them more than a rear-view mirror, we will want to use the wash feature.

In fact, it’s good to know that a tech trend like rear view cams will be accompanied by other innovations to make sure they work. The engineers are thinking these things through.