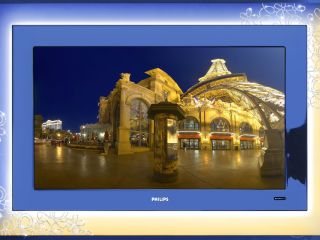 A New York jeweller encrusted the Ambilight TV with 2,200 diamonds

Celebrating its millionth Ambilight TV off the production line by calling in New York jewellers to encrust one in 2,200 diamonds may seem a bit bling for some tastes, but it's a certainly an ice breaker.

Philips unveiled the one-off design at its CES press conference, in order to highlight its track record in immersion technologies for home theatre that go a little beyond the norm.

While the Ambilight system - backlighting for TVs designed to fill your peripheral vision with a colour appropriate to the on screen action - has yet to really take off in Europe, it's proving popular Stateside.

Spokesperson Lucas Covers claims "80% [of owners] said the viewing experience was intensified. Consumers more involved in the movie they were watching." While that may be read as one in five didn't notice the relatively expensive effects, the technology is definitely here to stay, and three new 1080p screens were launched today in 37, 42 and 52 inch varieties.

The new panels are thinner and more power efficient than previous models, thanks to LEDs replacing the traditional backlight lamps, which also offers a greater colour range for the mood lighting.

Perhaps more relevant to cinema connoisseurs, though, will be the 120MHz refresh rates of the new screens and 4ms response times; along with the proprietary 'Perfect Pixel HD Engine' which analyses surrounding pixels to help reduce artefacting and boosts the colour range of the whole picture, it means there may be more to these TVs than gimmicks. Adam Oxford