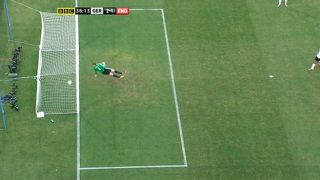 Goal-line tech will be in play in Rio next summer

The plans to broadcast next summer's FIFA World Cup in 3D are under threat following ESPN's decision to close down its 3D-only channel.

Football's governing body FIFA had planned to facilitate 3D coverage of the event, but has been forced into a rethink as a result of ESPN abandoning its investment in the technology, Sports Illustrated reports.

Niclas Ericson, FIFA's director of television said earlier this week: "We know that the technology has had a few setbacks in recent days, if you refer to some of the statements by (ESPN).

"It's clear when a big sports broadcaster like ESPN makes an announcement like that it creates a lot of extra tension (for the technology)."

The 2010 tournament was the first to benefit from 3D coverage, with 25 of the 64 matches broadcast.

However, the global appetite for the technology has fallen significantly in the last three years, now the novelty has worn off.

Ericson said some broadcasters are interested in picking up the coverage, but FIFA will take time to consider whether such a venture would be worthwhile, given the cost.

He added: "We are still reviewing whether we should do 3D for the 2014 FIFA World Cup, the number of matches."