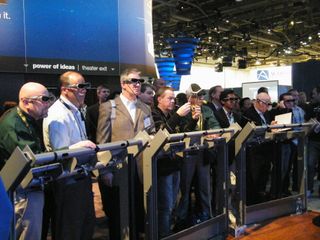 DTG - looking to be the saviours of 3D

The Digital TV Group (DTG) is looking into creating a 3D standard for UK 3D broadcasts via both broadcast and the internet.

The DTG made its announcement at its 3D TV seminar, starting what is the first-ever industry consultation for the technology in the UK.

Speaking about the DTG's plans, Simon Gauntlett, Technology Director at the DTG, explained: "The DTG has been at the heart of every development in UK digital television since its inception more than a decade ago.

"Since the launch of our consultation, 3D has evolved from an emerging technology limited to cinema into a compelling home entertainment proposition – with broadcasters set to launch 3D services as early as this year and technical standards approved for 3-D Blu-ray and HDMI – what is currently missing is a standard for delivering 3D to the home via broadcast or IP delivery."

The DTG hopes to plug the broadcast/IP gap and is taking a big part in the consultations, with Gauntlett noting: "Our 3D consultation revealed members had concerns over uncertainties over standards for 3D and clearly told us the DTG should assume a leadership role in developing an approved, open standard for broadcast 3D."

Getting 3D into the homes isn't going to be that straightforward, however, with standards expert Peter Symes of SMPTE who was at the event, telling Home Cinema Choice that: "it's not going to be easy, and there will be surprises."

Quite what the surprises will be is unknown. Then again, if we did know it wouldn't be a surprise.

At least we do know that 3D broadcast's will have to be 'platform agnostic,' so whether you eventually opt for a polarised experience – like LG is touting – or an active shutter one – like Panasonic and Sony – you will at least see things in another dimension.