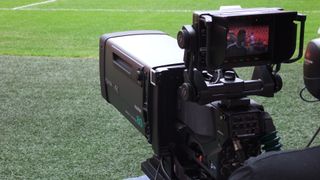 It's a bright, hot day on what's been a pretty poor excuse for a British Summer - but then the sun always does come out for the start of a new football season. Normally the Community Shield though doesn't have much relevance, but this year it's got Capital rivals Arsenal and Chelsea fighting it out.

And it also represents a major technological first too.

This year's match is the very first live broadcast on the UK's only 4K UHD channel, BT Sports Ultra HD.

Considering the importance of this day I'm surprised at just how relaxed everyone concerned seems to be. We make our way around the bowels of Wembley Stadium, checking out the brand new Ultra HD broadcast truck, tripping over miles of high-speed cabling and have our hands swatted away from prodding the latest 4K cameras pitch-side.

And all the BT folk are smiling and relaxed and acting like this is just another footie match.

I'm actually mildly disappointed there's no running about, no screaming and shouting in the dimly-lit underbelly of Wembley…

"To be honest it's been easier than when we launched the three channels two years ago," Jamie Hindhaugh, Chief Operating Officer of BT Sport, tells me.

The new Ultra HD truck, where the match feed is directed and controlled from, was only finished just five days before this first 4K UHD live broadcast. Though BT Sport has been running UHD tests over the last few months, getting the right mix of hardware, software and connections in place to make all this possible.

It's tested everything that goes into the new truck, but this is the first time the whole thing's been used for a proper live broadcast.

"In November Jamie decided he wanted a 4K truck," explains Dan McDonell, MD of the vehicle's manufacturers, TimelineTV. "That was when we first started to build it. It's been an incredibly tight turnaround."

Considering it took twenty-six weeks alone to put the chassis of this expanding techie truck together it's quite an achievement it's here at all.

"We've got an entire end-to-end 4K workflow," says McDonell. "A huge amount of processing power, and a lot of cabling and a lot of technology."

Inside BT's TimelineTV truck is the control-centre for the entire directorial operation. The centrepiece of the console is a full 49-inch Sony UHD monitor. Hindhaugh explains how important they've found it to have exactly what the end user is going to see in their homes displayed in the truck itself.

Arrayed around it are myriad screens, showing everything from the different cameras around the ground to the live Hawkeye goal-line technology feed.

It's interesting that BT Sport has taken the choice to run two separate presentations of the match, so there's one truck with a separate director looking after the HD broadcast and this new truck putting together an entirely separate Ultra HD show.

"One of the things we were absolutely adamant about," says Hindhaugh, "when you launch a UHD channel the first thing you CANNOT see is up-rezzed HD. The temptation would be to up-rez our presentation before the game and then go to the game for live 4K. We're not doing that here, we've got completely separate presentation setups."

The UHD presentation then is shorter than the main HD broadcast, eschewing a studio setup for having the match commentators in front of a UHD camera in the gantry above the pitch giving pre-match and half-time analysis into the 4K lens.

"We're absolutely determined to keep this native 4K all the way through the journey," says Hindhaugh.

It feels a slightly odd setup at first, and means if you stick entirely with the Ultra HD broadcast you don't get BT Sport's headline presenters or guest pundits. BT Sport though expects people at home to tune in to the HD channels for the analysis and then switch to BT Sport Ultra HD for the high-resolution match coverage.

It would seem to make sense to film everything in 4K and then downscale it all for the HD presentation.

That's likely to be the future of things, once UHD is a more established format and not the niche audience it currently is, but there are very valid reasons for keeping things separate.

Because of the quality of the cameras and the detail in the pictures it changes how the actual match is shot and directed.

"The key thing for me," explains Rob Levie, the 4K UHD director, "when we cover the game in UHD compared to what we do with HD, is we can afford to sit on the main camera one angle. We can sit a lot wider, so you can see a lot more of the players, you can see the movement of the play.

It's like you're in a seat in the main gantry, you can see everything."

BT Sport's signature BT Box, showing replays without interrupting the live game, is used a lot more too. With the wider angle it's not taking up as much of the main action.

"We can put replays in a lot earlier than we could in normal HD coverage," says Levie.

The camera operators themselves have to work differently too. "I ask them to pan a little bit slower," he continues." Naturally to them, because they're used to filming slightly tighter on normal coverage I need to ask them to come a little bit wider. When you go wide you can still see the names on the back of the player's shirts - it's that good."

But it's not all about that UHD broadcast truck though, there is an entirely separate little van full o' tech to provide the necessary high-speed encoding and transfer link to both BT Tower for piping around the country and out to the studio itself.

It's a complex process. The feed from the 4K UHD cameras is put together in the main truck and then the full 12Gbps feed is handed off in the carpark below Wembley to the link van.

The feed is then encoded - via four bonded H.264 encoders - to be more easily transported, compressed to a more manageable bitrate for transfer, and then sent out to BT Tower. Then it's on to the BT Sport studio where it's decompressed back to 12Gbps rates, lined up and recorded.

Then it's fired back to BT Tower, down the Infinity network and out to the new BT UHD Humax set top box.

The new BT UHD truck isn't the only new thing primed for this first Ultra HD live broadcast; the crew is the first to be using the new generation of 4K cameras in anger, along with their new lenses.

The twelve Sony 4300 cameras are arrayed around the ground, offering different angles on the pitch, which means they need different lenses. There are six Fuji 80:1 box lenses and another six Fuji 22:1 lenses on show.

And boy does it all work beautifully.

Even on the slightly aged Samsung UHD TV we watched the coverage on upstairs the picture was crisp and the wider angle really gave more the impression you get from being at a live game.

The extra frame rate makes the match seem much smoother and maintains the extreme level of detail even when the cameras are moving and the action picks up.

I'd want the Ultra HD service for that alone.

And the fact BT Sport is pushing ahead as the technological lead in the UK broadcast market is important not only for the company but also the TV manufacturers too.

"They're very supportive," Delia Bushell, MD of BT Sport, tells me just before kick off. "We probably work more closely so far with Sony, but all of the manufacturers are obviously very excited because 4K is the focus of what they're now trying to push."

And content has been such a big problem for the wider adoption of 4K. Things like Netflix's UHD offerings (soon to hit the new BT Humax box "as soon as we've got it ready") and now a live broadcast channel will really help drive that forward.

"When everyone moved from SD to HD it was very much sport that lead that," says Bushell. "So I think again it will be the same for Ultra HD. Live sport is always where it crystalises the step-change in the viewing experience. So, for BT Sport to come first launching Ultra HD for us is a real milestone."

The Community Shield coverage then was a success. The pictures were flung out far and wide across the country, spilling millions of pixels onto the Ultra HD TVs of the few lucky enough to have the advanced technology necessary.

But it doesn't stop there.

This weekend will see the first Premier League game - and the very first game of the entire top-tier season - broadcast live in Ultra HD as Manchester Utd. take on Tottenham.

Then it's out into the wider world of sport, with rugby, squash, MotoGP and others getting the full Ultra HD treatment.

This is the thin end of the wedge then, and an introduction into how sport and TV is going to be broadcast and viewed by everyone in the very near future.