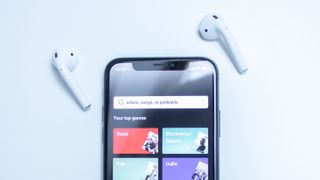 With the success of the ‘stories’ feature on Snapchat, it’s no wonder that other social media platforms such as Instagram, Facebook, Messenger, and even Twitter jumped on the bandwagon, some of which even overtook the popularity of the originators.

While the format appears rather similar to Instagram and Snapchat’s feature, the main difference in Spotify’s approach is in allowing artists to communicate with their listeners via a series of ‘cards’ that can be cycled through.

The Storyline shows up below a song’s transport controls and – once you’ve swiped up on it – provides further insight from the artists themselves. It’s found either above or below the existing ‘Behind the Lyrics’ section, which shows lyrics and information pulled from Spotify’s partner, Genius.

In contrast to Behind the Lyrics, Storyline allows users to flip through the cards at their own pace rather than in time with the music. It's also information supplied directly by the artist to Spotify, although there’s no sign yet of a submission tool appearing in the service’s artist dashboard, indicating that only select artists have been given the privilege at present.

The feature is showing up on select users’ mobile apps across both iOS and Android (but not desktop at present) in multiple territories, although there’s no official word on who exactly has been selected.

There’s no guarantee that the Storyline feature will see a permanent public rollout, but if the tests prove successful, we’ll likely see more artists using the service to communicate directly with their fans.