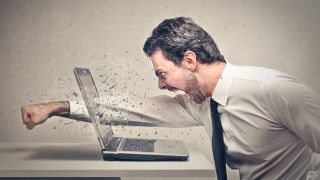 There are reports that some people are getting stuck in Windows 10 S Mode and are unable to upgrade to the full version of Windows 10.

Windows 10 S Mode is a version of Windows 10 that ships with certain devices, like the Surface Go, and only allows users to download apps through the Microsoft Store, and not from websites.

While Microsoft argues that Windows 10 S Mode helps protect people – as you shouldn’t be able to download malicious software from the internet while using it – most people find being confined to the Microsoft Store frustrating, especially as not every program has a version available as a Microsoft Store app (also known as a UWP or Universal Windows app).

Usually, the process of leaving Windows 10 S Mode is to go through the Microsoft Store (of course), where the option to upgrade to full Windows 10 will be there.

However, people are reporting that the ‘Switch out of S Mode’ page isn't loading – instead, the Microsoft Store is showing a blank screen.

It’s this kind of unreliability which makes people keen to leave Windows 10 S Mode and never use the Microsoft Store again.

The good news is that Microsoft is aware of the problem. Windows Latest got in contact with Microsoft Support, and was told that: “Microsoft is aware that some users are unable to upgrade to Pro Edition or switch out of S mode as a result of this blank page. We are investigating the cause and when a resolution is available the Store will update without any user action necessary.”

So, a fix is coming, but Microsoft notes that: “There is no current estimate on when this condition will be resolved.” Essentially, if you’re stuck in Windows 10 S Mode hell, you might be there for a little while longer.