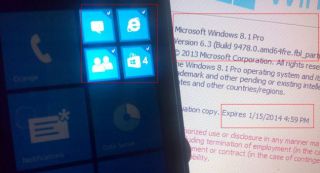 The shots, posted by Windows-Phone.pl show a Notifications Live Tile on the homescreen of a Windows Phone handset, suggesting an Apple-style Notifications Centre is in the works.

The leaked shot also showcases ticks applied to multiple Live Tiles at the same time, which suggests users will have the power to move around more than one app at a time, or perhaps even group them into folders.

The folks at WPCentral reckon it's the former rather than the later, as multi-tile selection is a feature launching on the Windows 8.1 and Windows 8.1 RT desktop updates coming next month.

But before we get to that...

However, it's not the first Windows Phone update we've stumbled upon in the last few days. Just this weekend screenshots of the GDR3 update - likely to predate the launch of WP8.1 - leaked onto the web.

Judging by the screenshots, that update will bring a new driving mode to mute all calls and alerts when a Bluetooth headset is connected. It'll also enable users to close apps from the multitasking view and allow users to choose whether they want their screen to appear in portrait or landscape mode.

That final feature is said to be designed with the rumoured 6-inch Nokia Lumia 1520 (codenamed Bandit) specifically in mind.

We've no word yet on when either of these new OS updates are liable to drop, but we'll have the latest when anything official turns up.