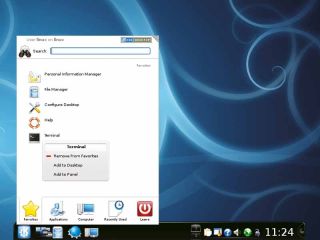 There are several ways to add applications to the panel, but the easiest is to right-click on it from the K menu

Have you been clinging to KDE 3.5 like a polar bear to the last Arctic ice shelf?

If so, now's a good time to consider jumping on to the mainland. The recently released KDE 4.1 is a vast improvement over the original.

Hundreds of bugfixes and refinements mean that the KDE desktop is now a stable, functional and productive environment. It's faster, more streamlined and full of eye candy, and is also where all the developers' effort is now concentrated.

Things are only going to get better for KDE users. But, as with all these big changes, there are still teething problems – things don't always work the way you expect them to and many of the newer features are poorly documented.

We've spent the last few weeks using KDE 4.1 and making a note of everything we changed to help the desktop environment feel a little more comfortable, as well as to sidestep a few of the issues we ran into.

Even without Compiz, KDE still has the potential to look great, thanks to its smooth animations.

For lovers of eye candy, one of the best things to happen to the Linux desktop over the last few years has been Compiz – that wonderful world of spinning cubes and wobbly windows. But with the 4.0 release, KDE developers seemed to ignore this desktop revolution.

KDE could, and can, be made to work with Compiz, but it created an unstable environment in which applications didn't always behave as they should, and you also lost the advantage of running a KDE window manager. This is the part of your desktop that knows where all your windows are and what state they're in.

Without a native window manager, KDE had no idea where windows were positioned or whether they were minimised or maximised. What made the problem worse was that the KDE developers re-invented the same wheel, creating their own entirely independent compositing manager and bolting that functionality into their window manager.

The result was a few poorly executed effects that couldn't even compete with the first release of Compiz several years ago, let alone the latest version. Fortunately, version 4.1 has gone some way to redress this imbalance. KDE's array of compositing effects now numbers over 30 and includes some of the same idle timewasters you get in Compiz.

Desktop effects can be opened by either right-clicking on the title bar of a window and selecting Configure Window Behaviour, or from the Desktop icon in the System Settings panel. What you get is a long list of the available effects, split into various categories.

Each can be enabled instantly by clicking on the small tick box at the far-right of the entry. If there are any parameters for each effect, these can be changed by clicking on the spanner symbol. We found, for example, that the default drop-shadow effect was a little tame for our tastes.

In the Shadow configuration, we went for an X and Y offset of 5, a shadow opacity of 35%, and a fuzziness and size of 10. We also made sure the colour was a solid black, rather than the dull grey of the default.

We enabled the wobbly windows plugin (but we have to admit that this is an acquired taste). And we also enabled the Dim Inactive effect, but made it a little more subtle by changing the strength to 5. This slightly dims inactive windows on the display, and pulls your eye to the window you're currently using.

More useful eye candy from the KDE effects department is provided through the choice of window switcher. These are effects that display all your open windows when you press the Alt+Tab key combination to switch between them.