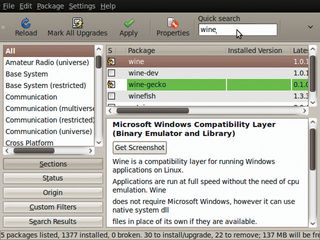 Should they include or remove a particular package? Should they apply a patch that may break compatibility with older machines?

These matters are discussed fiercely in forums where trolls growl, flames burn and project leaders defend their decisions against an onslaught of dissident. But as an individual you have none of these issues.

You can install and remove packages as and when you want to, and you can choose whether to install free or non-free software on your system. Why should you have to live with community decisions when you can make Linux work your way?

However, the distribution you install will likely contain drivers and components that you don't really want or need on your system.

Not only that, the software you always install on every new system has to be downloaded and installed separately each time, which is time-consuming and inconvenient. That's where we come in.

If you spend more time programming than you do playing games, you could replace the game packages with your favourite IDE. Or why not remove drivers for hardware you'll never need and save disk space?

Those of you who found useful speed increases in last issue's Supercharge Linux feature could even apply those tweaks automatically from the install stage. Whether you're tailoring a system for a particular machine or plotting to knock Ubuntu off its perch, there are myriad tools out there to help you do it.

Some are easier to use with less potential for customisation, while others are more difficult to configure but give you maximum control. We'll cover the pitfalls and which areas you can tweak and tailor to suit your needs, but in the end you are in control, and can apply as many or as few changes as you want – it's your Linux, your way.

Tailor Ubuntu for your own ends

If you're fed up with installing the same components each time you install Ubuntu, you'll find this is by far the easiest way to customise your install CD to include those packages.

You'll need 5GB spare space on your hard drive, an Ubuntu install ISO and Ubuntu Customisation Kit installed from your package manager. Once you have these resources available to you, simply launch UCK and follow the on-screen instructions.

You'll find that most of the usual steps you would have had to take in the past to edit your live CD are all automated. Add this to the intuitiveness of the GUI and it's easy to see that anyone with the inclination can customise their copy of Ubuntu quickly and easily. You can edit Ubuntu as much or as little as you like but you'll be the one calling the shots.

A common pitfall within the UCK setup is to miss the dialog that enables you to change which packages are included or omitted by default, with the result you wind up with a standard Ubuntu install disc with a custom name, which isn't overly useful!

To ensure you gain access to Synaptic, answer 'Yes' when you're asked whether you want to customise the CD manually during building. This will give you a dialog that offers to open Synaptic or a terminal, or continue the installation.

In our example (cunningly called BobBuntu) we installed the Medibuntu repository (see LXF124's tutorial on Ubuntu PPAs for more insight on this) by opening the terminal from the dialog, and ran the following command:

You can then install the GPG key for the repository by typing:

This third-party repository gives us access to all kinds of non-free software such as Adobe Reader, Skype and codecs for restricted media formats.

Firing up Synaptic from the dialog should now show Skype packages available when you search for it (you may need to reload the list of packages).

In BobBuntu we also stripped out OpenOffice.org and replaced it with AbiWord and Gnumeric, then removed Ekiga and replaced Firefox with Epiphany. You can include your own choice of software from a Launchpad PPA and any third-party repositories, or remove packages you rarely use simply by checking and unchecking boxes.

Once you have committed your changes by clicking on Apply you can then proceed to the build stage, which will produce your live CD image in the /tmp/remaster-newfiles/ directory as lived.iso. When the build is complete you can burn this to CD or try the image out in a package such as VirtualBox to try your own personalised Ubuntu respin.

Ubuntu Customisation Kit has an excellent array of features. You can easily select packages, desktops and locales for instance, and you can also include Wubi if you're distributing your respin to Windows users.

SATANIC DESIGNS: Whatever your niche, there's a Ubuntu respin out there for you

However, UCK does lack a few of the features that make the other tools and services worth considering. For example, you can't define the look and feel of your Ubuntu respin without extensive terminal wizardry, and you can't create a boot image for a live USB (though you can do this from your new live environment).

You're also bound to Ubuntu as your host system and an Ubuntu variant as your final product, but despite these shortcomings UCK is a great introduction to distro development and is the ideal tool for those of you who simply want a copy of Ubuntu that installs and runs your favourite working environment from the outset.