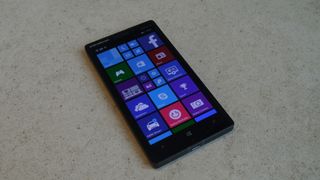 Could 2K be on the way to Windows Phone?

Microsoft might be in the process of unleashing Windows Phone 8.1, but it seems the Redmond company isn't going to stop at Cortana.

Nokia Power User has picked up on the scent of a new General Distribution Release 2 version of Windows Phone 8.1 on its way to hardware manufacturers. Supposedly the new software release is adding some oomph to Microsoft's mobile platform with support for 2K display resolutions and Qualcomm's latest Snapdragon 805 processor.

Prior to this stealthy update, we've seen Windows Phone 8.1 support a maximum display resolution of 1080p and up to a Snapdragon 800 processor as seen on the Lumia 930.

With this new software build, we could newer phones equipped with these bleeding edge specs. In fact, leaks are already starting to drip.

According to a GFX benchmark we spotted on April 2, a new Windows Phone handset christened the Qualcomm LiQUID boasts a 1440 x 2560 resolution and is equipped with a Snapdragon 805 processor.

And on January 20, there were rumors a Nokia Lumia 1520 Mini would feature a pixel rich 4.3-inch, 513ppi Full HD AMOLED screen.

With all the big phone shows and Microsoft Build out of the way, it's anyone's guess when these monster handsets will make it to the real world. We've got our fingers crossed it's soon, but stay tuned as we're sure to hear more before too long.