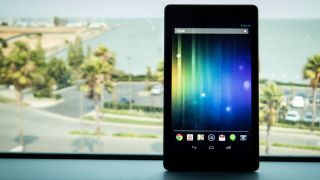 The new Android 4.3: Jelly Bean is fresh out of the confectionery, yet we already have strong inklings that Key Lime Pie will soon be ready for consumption.

Here's the latest info: In recent days, someone was using the Chromium bug tracker. Chromium is the open-source project behind Google Chrome.

This intrepid test-runner was tinkering with a few devices, including a Nexus 7 and Nexus 4. Average enough, but these particular devices were shown to run a KRS36B Android build.

Why is this significant? Well, it all comes down to the "K." Jelly Bean builds start with a "J," like JWR66V and JSS15J, which represent the OTA and Android Open Source Project builds of Android 4.3, respectively.

We can't rely too heavily on the appearance of a single letter (even a phonetically strong letter like "K") as 100 percent undeniable evidence that Key Lime Pie is frolicking free in the wild.

However, we've previously heard Key Lime Pie referred to as the "K release" of Android. And if the naming scheme continues, KRS36B falls right in line with the Android nomenclature.

When will this mystery resolve itself? We expect October, so just sit tight, K?