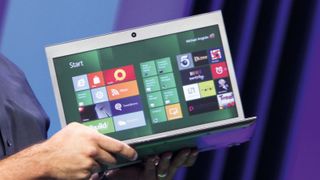 Windows 8 isn't perfect, but it is good

This new operating system is rubbish. The new interface is style over substance. There are compatibility issues with old software. There's pointless eye candy, and a lack of core features. Nope, not Windows 8: Mac OS X.

That wasn't the majority verdict, of course, but if you chose your sources carefully you could easily build a picture that was more OS What The Heck than OS X.

I think something similar is happening with Windows 8: while lots of people are genuinely excited about it, in some parts of the tech sphere it's already being reported as the worst thing humanity has done since we crawled out of the swamps.

Some are even calling it the new Vista.

I think that's unfair, and not just because I reckon that Vista was a decent operating system that just happened to be launched very, very badly.

Is Windows 8 perfect? Of course not. But neither is it the worst thing since Paul McCartney's Jubilee performance.

Anything different - Facebook redesigns, the Office ribbon, a slightly rounder corner on somebody's favourite iOS app icon - can generate howls of protest, and tech experts are particularly quick to condemn things for their perceived shortcomings.

Remember "No wireless. Less space than a nomad. Lame" about the iPod, or the "it's a toy! Apple is doomed!" howls that greeted the original iPad? Some - not all, but some - of the anti-Windows 8 publicity comes from the same place.

But Windows has to change, because PCs are changing. Even the most ardent Apple-haters are finding it hard to argue against quarter after quarter of tablets outselling PCs, and to my eyes that's the most exciting bit of the consumer PC market right now. The consensus says tablets will become a huge part of everyday computing, and if Microsoft wants to stay relevant it needs to compete in that market.

On that basis Windows 8 is really impressive: Microsoft has turned a supertanker on a sixpence to create a genuinely good mobile OS. I wouldn't dream of buying a Windows 7 tablet in a million years, but I'm really impressed by the Windows 8 devices we've seen so far. On tablets, Windows 8 is great.

On the desktop? I'm not so sure, but then Microsoft is still working on that bit, so maybe the Metro/Desktop switch will be less jarring by the time the finished OS ships. And let's face it, Microsoft has plenty of time: the big desktop users, the corporates, tend to skip generations anyway, so their upgrade path is Windows XP > Windows 7 > Windows 9.

Windows 8 isn't Windows 7 with a skin; it's a genuine attempt to bring Windows into a new computing generation, and to do it in such a way that it delights the early adopters without alienating the old timers.

Will it work? I've no idea. But I think we should give Microsoft the benefit of the doubt. Let's wait and see what actually ships before we make up our minds.