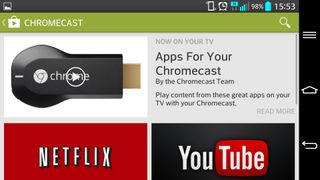 Google is in talks with third party manufacturers over the launch of more Chromecast-like devices, as the company looks to make the Google Cast streaming tech an industry standard available on Android and iOS.

Speaking to Gigaom, Google VP of Product Management Mario Queiroz, said the web giant has big plans for its little dongle in 2014 which may include new hardware solutions and an open SDK for developers.

"Our broader goal is for Google Cast to be established as a standard," Queiroz said, while adding that an API will allow developers to add Cast functionality to applications on other platforms.

Queiroz told the site Google is in "serious conversations" with a number of manufacturers in the hope of rolling out more Cast-compatible devices in 2014.

As well as the open SDK and more devices Google is also planning to bring Cast functionality to as many applications as possible in the next 12 months.

Although Cast-friendly apps have been on the rise in recent months, Google acknowledges "there will be an expectation from consumers that any and every app will be 'castable.'" Queiroz said "hundreds of developers have already signed up for the scheme.

2014 will also mark the year Chromecast officially goes global with an international roll out on the horizon. The VP says expectant Android device owners will be "pleasantly surprised" by the scope of the expansion.