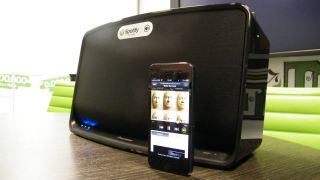 Free mobile streaming may be imminent

Currently, those wishing to listen to Spotify on their mobile devices must fork over a monthly subscription fee or settle for customisable radio stations, but that may be about to change.

The Wall Street Journal brings word from "people familiar the plans" that Spotify will offer limited, ad-supported free streaming through mobile apps, as it does on the web and through desktop clients.

According to the report, three major record labels have already signed off on the idea by agreeing to new licensing deals.

Aside from that, details are thin on the ground at present, but it's entirely possible. If the report turns out to be credible, Spotify could announce the feature next week at a media event in New York City.

Elsewhere, it hasn't been the best week for Spotify PR-wise thanks to its welcomed but potentially ill-advised scheme to bring some much-needed transparency when it comes to artist payments.

It's great for Lady Gaga and Katy Perry who's songs get millions of plays. At the time of writing, the latter's Roar, which has been played over 65 million times on Spotify would have made her $392,643.

For the emerging artist who's play count is in the hundreds or thousands? Well they might be able to buy a 6-pack and a pizza for their troubles.