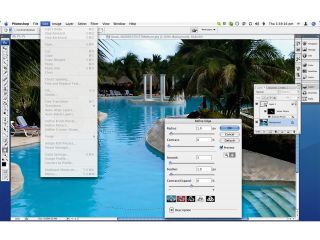 Adobe will release not one, but two versions of its next-gen pro image editing tool Photoshop CS3. Both launch as part of the Creative Suite 3 (CS3) bundle later this month. Adobe made the announcement at the PMA show in Las Vegas this morning.

"Photoshop is being used in a much wider array of workflows and there's been pressure on [it] to do more in those spaces," said Kevin Connor, senior director of product management for digital imaging at Adobe.

Apart from tools that will be featured in Adobe Photoshop CS3, the Extended version will also have "new capabilities for 3D graphics, motion graphics integration, image measurement, and analysis", according to Adobe.

Adobe Photoshop CS3 Extended is primarily intended for film, video and multimedia professionals, and graphic and web designers. The idea is to pull power from the Photoshop image-editing toolset when editing 3D and motion-based content, which can then be exported to a number of formats, including QuickTime, MPEG-4 and Adobe Flash Video.

Adobe said it has considered separate Adobe Photoshop versions before, but found many features overlapped each other.

"That led to another type of strategy for Photoshop. Rather than create a new application, Extended is a superset of features that can specifically benefit people in those markets," Connor said.

The move represents Adobe's effort to continue dominating the image editing software market. As well as launching the new CS3 bundle, it has also launched Adobe Photoshop Lightroom - which edits photos taken by high-end cameras - and is about to offer a basic online version of Photoshop. It also offers Photoshop Elements for the home market.

Adobe is to fully announce the CS3 line-up of products on 27 March. The software is expected to ship this spring.