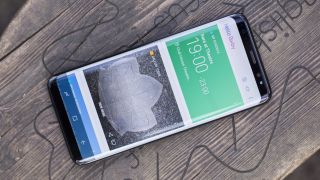 According to a report from Korean news site ETNews, the Galaxy Note FE - that stands for "fan edition" and will use a lot of the leftover Note 7 parts - will launch in Korea on July 7 and will come with Bixby built-in.

Samsung's voice assistant tech originally debuted on the Galaxy S8 and Galaxy S8 Plus and many expected the next phone to tout the voice based tech to be the Galaxy Note 8, which is expected to launch in August.

If this latest rumor is correct, it may mean Bixby will be coming to a more affordable device than Samsung's flagship range of products.

The Note 7 didn't have a physical Bixby button, so it's uncertain if the Note FE will have one considering it is reusing the casing from the original phone. Both the Galaxy S8 and S8+ have a dedicated hardware button to activate the assistant.

The ETNews report suggests Samsung originally planned to make 150,000 units of the phone, but it has now upped the order to 450,000 that it will be distributing in its home market.

This means we may not get to see the Galaxy Note FE launch around the world like some had hoped and it may just be an exclusive handset for the Korean market.