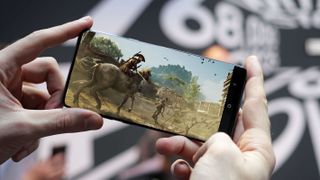 Throughout 2018, there were multiple rumors about Samsung working on a gaming phone that used the company’s own smartphone GPU, although there’s been nothing official yet on either the phone or the graphics chipset.

Today, Samsung has announced that it will be entering into a “multi-year strategic partnership” with computing giant AMD to develop and manufacture mobile graphics chipsets for Samsung smartphones.

Specifically, AMD’s Radeon graphics architecture – currently utilized with great success in PCs and gaming consoles – will be licensed to Samsung “for use in mobile devices, including smartphones, and other products that complement AMD product offerings”.

What could this mean?

The Radeon IP promises “ultra low power and high performance” and will more than likely end up in Samsung’s Exynos System-on-Chip (SoC) processors in the future, however no official plans for specific products have been released.

As this description suggests, successful integration of Radeon technology into a smartphone should, theoretically, allow for more powerful graphics processing with less demand on power consumption.

As a result, we could potentially see more affordable handsets with decent graphics capabilities, or premium flagships that manage to run more intensive and demanding games and simulations without overheating or crippling battery life.

While no timeframe has been given, it’s unlikely that Radeon-powered GPUs will be used in Samsung smartphones in the immediate future, as a good degree of optimization will be required to customize AMD’s chips for smartphones, which offer considerably less power than devices such as PCs and consoles.