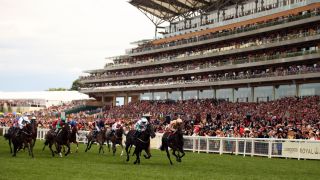 This year's Royal Ascot is expecting 300,000 visitors in total, and many more hundreds of thousands to watch around the globe. So yes...you could say it's popular! As well as being one of the premier horse racing events of the season - with 30 races to enjoy over the course of five days - it also brings out the stars, the high society and the Royal Family. And we'll tell you how to watch a 2019 Royal Ascot live stream from wherever you are on Earth.

This year the Royal Ascot week at the Ascot Racecourse in – you guessed it – Ascot (about 30 miles west of London), runs from Tuesday June 18 to Saturday June 22.

The event dates back over 100 years and it's still going strong. While Royal Ascot week is now as much about dressing up, enjoying food and drink and, let's face it, having a flutter – it's also, of course, about the horse racing.

Plenty of world famous trainers, owners and celebs will be at the event, but it's the horses that are the true stars.

Thursday was the famous Ladies Day, where the hats and dresses get all the attention. But at 4.20pm there's also £500,000 on the line in one of the event's biggest races - the Gold Cup. While the Diamond Jubilee Stakes on Saturday (also at 4.20pm BST) has to be the marquee event of Royal Ascot week. And with Frankie Dettori back in the saddle for 2019, he'll be bringing the personality and looking to add to his prolific 60 wins at this event over the years.

If you want to catch all the action live, read on to find out the best way you can do exactly that from wherever you are. Good news - getting a Royal Ascot live stream is absolutely free in the UK.

How to watch Royal Ascot 2019 for free in the UK

Royal Ascot 2019 will be aired on ITV live on ITV meaning it's free for anyone to watch via TV, the ITV Hub app or a TV player online.

Coverage of the event will start at 1.30pm BST daily and run across the five days.

Get a Royal Ascot live stream from outside your country

If you're outside the UK this week and want to keep up with your wagers and accas with Ed Chamberlain and his ITV racing chums, then you can always use a VPN as described below to tune in without being geo-blocked (and, by the way, we have US watching options below that, too).

It's surprisingly easy to do, and can be broken down into three easy steps (or should that be jumps?).

1. Download and install a VPN
Virtual Private Networks offer a secure, encrypted way to get connected online. But because you can also connect to a server anywhere in the world, they also help to get around geo-blocking. Very handy!

We've tested all of the major VPN services and we rate ExpressVPN as the absolute best. It's compatible with loads of devices (Apple and Android mobiles, Amazon Fire TV Stick, Apple TV, games consoles, etc) and we find it extremely easy to use. It's our number one favorite, topping our best VPN list at the moment:

- ExpressVPN:  the best all-round VPN for streaming, comes with 30-day trial and also 3 months FREE when you sign up for an annual plan
- NordVPN: SmartPlay tech makes NordVPN a great choice for streaming
- VyprVPN: blazing speeds mean that Vypr is an ideal VPN for 4K video

2. Connect to the appropriate server location
Simply open the VPN app, hit 'choose location' and select the appropriate location - it's super easy to do. So choose a UK server if you're a Brit abroad this week and still want to live stream Royal Ascot 2019.

3. Go to your Royal Ascot broadcaster
Now that your mobile, tablet, laptop or streaming advice thinks you're back at home, you can head to the broadcaster's feed and watch as if you were back at home.

How to live stream Royal Ascot 2019 from the US

In the US, NBC Sports will be showing live coverage of the Royal Ascot 2019 week from 8.30am ET / 5.30am PT every morning. You'll need an NBC cable subscription to get access.

Cord cutter? No worries - there are loads of TV streaming services that will let you access NBC Sports content without signing up to a long cable agreement - and usually with a free trial, too. For example: