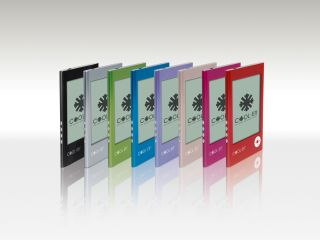 A new eBook is set to launch in the UK later this May, with the manufacturer claiming that the 'Cool-er' is half the weight of other eBooks on the market, such as the Sony Reader and the Amazon Kindle.

And while Amazon has recently announced the launch of a new, larger-screened Kindle DX, there is still no word from the online retail giant as to if and when we might see the launch of the device in the UK.

The Cool-er eBook and its support site (also launching on 29 May) were both designed by "entrepreneur, author, avid reader and world traveller" Neil Jones, who thought it was time for the "iPod moment" for e-readers – and you can see the influence of Apple's product design in his new device.

According to the company's press release, Jones "was tired of e-readers that are unwieldy, expensive and restrict readers' choice and ability to share books," and hopes that the Cool-er eBook will prove popular "as the ideal smaller, more affordable, lighter and faster e-reader that is compatible with how we live and work today."

TechRadar will be trying out the new device along with its online bookstore later in May to give you our considered opinion on whether or not this new start-up can take on the might of the Sonys and Amazons of this world.

On paper (well, okay, on screen!) it certainly sounds like a contender weighing a mere five ounces, measuring in at around one-third of an inch thick, with Cool-er's to be made available in eight languages and in eight colors.

Also of interest is the claim that its batteries will run for weeks on a single charge as the "display technology has the advantage of only needing power use to turn pages."

One charge of your Cool-er will give you 8,000 page turns of books in pretty much every format you can get hold of them in - in ePub, TXT, JPG or PDF formats – and the screen can be viewed at any angle, even in direct sunlight.

Finally, with one gigabyte of built-in storage, an SD card slot and an expansion you might even want to use the Cool-er as an MP3 player to download and listen to "thousands of audio books or learn a new language with more than 40 language courses" that will be available from Coolerbooks.com – which is set to offer over a million eBooks for download from 29 May.